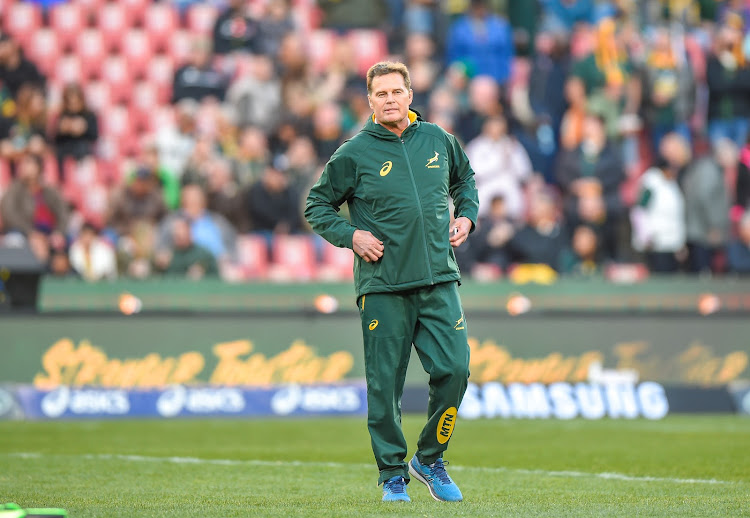 In a rare occurrence for a Springbok mentor‚ coach Rassie Erasmus has some selection posers in the short and medium term‚ but all of them are positive.

With seven weeks to the Rugby World Cup‚ and with only one match of the Rugby Championship remaining and one more ‘friendly’ after that before he names his World Cup squad‚ Erasmus must be 95% sure of his ideal 31 for Japan 2019.

Injuries to captain Siya Kolisi and wing Aphiwe Dyantyi‚ who are both dead certainties for the World Cup if they pass fitness tests‚ are the only real pieces of the puzzle left to fall into place.

Kolisi’s inclusion will mean that Kwagga Smith is set to miss out while backrower Marcell Coetzee is only likely to make the flight to Tokyo if Warren Whiteley doesn’t recover from a bicep injury in time.

Springboks prove difficult to break down ahead of World Cup

Rassie Erasmus will take positives from Saturday's 16-16 draw with the All Blacks in the Rugby Championship but the Springboks coach thinks the ...
Sport
2 years ago

Rynhardt Elstadt‚ who played against Australia‚ will remain on the fringes.

With Kolisi‚ Pieter-Steph du Toit and Duane Vermeulen making up the first choice back row‚ and Francois Louw taking another place – Coetzee‚ Smith‚ Elstadt and possibly Whiteley‚ are fighting for one place.

Scrumhalf Herschel Jantjies has taken his Test opportunities with relish.

He has been so impressive that Embrose Papier and Ivan van Zyl‚ two of last year’s halfbacks‚ are forgotten.

The return of Cobus Reinach means that the three halfback berths for Japan are locked in and all that remains now is for Erasmus to work out how much game time each needs in the remaining few outings.

Springbok coach Rassie Erasmus is set to mix up his squad for the team’s third and final 2019 Rugby Championship match against Argentina in Salta in ...
Sport
2 years ago

Inside centre is a position that appears to be under more scrutiny than most. Damian de Allende is sure to go to Japan‚ leaving Frans Steyn and Andre Esterhuizen battling for one spot.

Esterhuizen started against Australia at Ellis Park 10 days ago and is likely to have another chance against Argentina in Salta next week.

Whether that is from the bench or in the No 12 shirt depends on whether Steyn is finally elevated to the starting lineup after two decent cameos off the bench.

He has the ability to punch holes on the gain line and he also has a strong left boot. But Steyn is another huge man for an inside centre and has the same physical ability.

Social media pundits are calling for a baker's head to roll as anger continues to simmer over an offensive rugby "quota cake" spotted at a Checkers ...
News
2 years ago

He covers fullback and flyhalf too‚ which makes him a valuable commodity in tournament rugby.

Esterhuizen is likely to be one of the unlucky few left at home but on standby to fly to Japan in the event of injuries.

The three hookers seem to be settled with Schalk Brits‚ 38‚ set to become SA’s oldest ever player at a World Cup as the third choice.

Tighthead Frans Malherbe’s place could be in jeopardy after a lacklustre Super Rugby season and a mediocre outing against the All Blacks last week.

Chaos broke out on the public stands of Ellis Park Stadium when spectators realised they were sitting next to rising Springbok star Herschel ...
Sport
2 years ago

Trevor Nyakane has developed into a world-class tighthead and his mobility and ball skills give him the edge. It looks like Malherbe and Vincent Koch are duelling for a place.

Lock Marvin Orie’s return to the squad for the clash in Salta is more about giving him some experience if he is needed in Japan‚ but only as a replacement. Eben Etzebeth‚ Franco Mostert‚ Lood de Jager and RG Snyman have to go to Japan.

In all positions Erasmus has options‚ which is exactly what he set out to do when he took the job 15 months ago. Developing depth was a priority‚ which is what he has managed to do in a short time.

The prize for doing it well is having to make some tough choices and to leave out some very good players. But that is how World Cups are won.