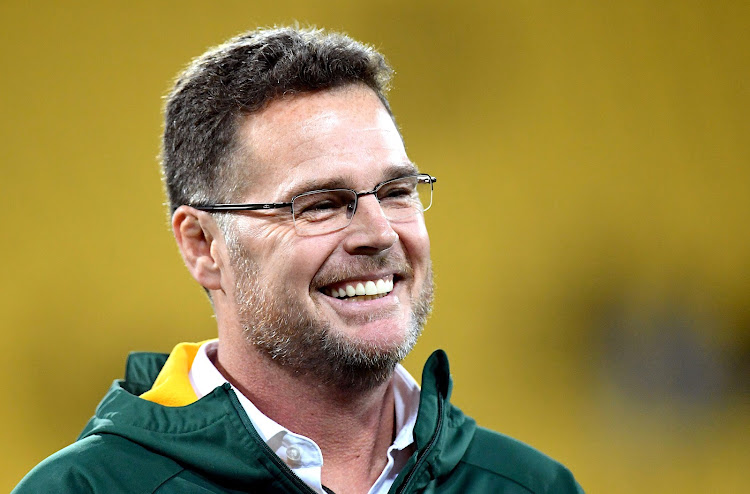 Springbok coach Rassie Erasmus admitted to being “worried” as he edged closer to finalising his Rugby World Cup squad after a three-day training camp in Auckland following last week’s draw against the All Blacks.

The Boks have one more Rugby Championship fixture – against Argentina in Salta next week – followed by a friendly against the same opponents in Pretoria a week later.

After that‚ Erasmus will name his 31-man squad for the World Cup in Japan.

“There are 36 to 38 players in our camp and in our plans at this stage‚” Erasmus said from Auckland.

“It’ll be tough for me personally because there are going to be six or seven guys who’ll fall out of the squad and I’m already worried about that.

Former Springbok coach Jake White believes that Rassie Erasmus got his tactics spot on by sending his best team to New Zealand early and forcing the ...
Sport
1 year ago

“We are lucky there are few injuries at this stage‚ and hopefully it will stay that way. Some guys will drop out‚ which is tough‚ but we will worry about that after the game at Loftus.”

After beating Australia 35-17 at Ellis Park and drawing 16-16 with the All Blacks in Wellington‚ the Boks are in pole position to win the Rugby Championship for the first time since the tournament included Argentina in 2012.

The tournament has been cut to a single round of matches due to the World Cup‚ and while winning the Championship is not the primary objective in a World Cup year‚ Erasmus said it was the team’s immediate goal.

Staying in Auckland instead of returning back to South Africa was also an attempt to give the team the best chance of success in Argentina.

“Winning the Rugby Champs will be very important because it creates self-belief within the team‚” Erasmus said.

The appointment of former Blitzbok star Vuyo Zangqa as Southern Kings assistant-coach for the 2019-20 season shows that the organisation is intent on ...
Sport
1 year ago

“We want to be a united team. I guess on Saturday night that will be one of the things we’ll be trying to achieve.

“We chose to stay behind in Auckland [after the Wellington Test] mainly for two reasons.

“Firstly‚ to cut down on the amount of traveling time between New Zealand‚ South Africa and Argentina.

“And secondly‚ we had some good team-building exercises‚ while we used the time together to fit in some extra training time with the squad.

After unexpectedly losing their opening Currie Cup match to the Griquas‚ the Sharks found a bit of sharpness against Western Province that has to be ...
Sport
1 year ago

“We have grown into a very tight unit‚ so looking back at the past week I think we ticked both those boxes.”

Half of the squad and management are set to travel to Argentina later on Friday night from Auckland‚ while the rest of the South African travelling party are due to fly out to Buenos Aires on Sunday.

The full squad will train together again on Monday morning in the Argentine capital‚ where the South Africans will be staying until next Thursday before flying out to Salta.