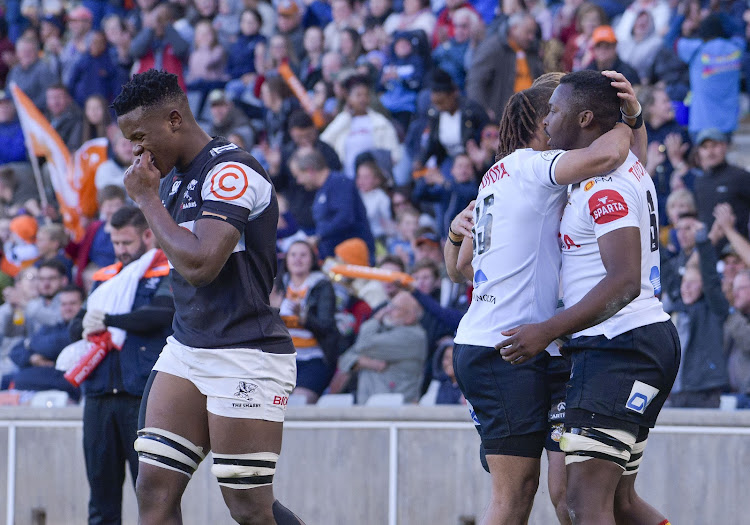 The Free State Cheetahs produced an astonishing second half turnaround to beat the Sharks 51-30 in Bloemfontein, qualifying for next week's Currie Cup final that they'll be hosting.

While they outscored the Sharks by seven tries to four, it was the reeling in of the 20-11 half-time deficit that was impressive.

They drilled in 40 points to the Sharks 10 to book a date with the Golden Lions.

With the Cheetahs and the Lions finishing first and second, they are deserved finalists.

The Cheetahs though may need to realise they won't always get away with their slow starts, which has been the case in the Western Province win last week and the semi-final.

In what was a first half of plentiful opportunities, the Sharks made better use of theirs.

Having scored the game's first try through Curwin Bosch in the second minute, they added two more through live-wire scrumhalf Sanele Nohamba in the 21st minute and Lwazi Mvovo in the 38th minute to take what looked like a decisive nine-point lead.

The Cheetahs scored one try through Sipato Pokomela in the 13th minute, but the Sharks showed more enterprise on attack, especially when the moved the ball wide.

In the wide channels, the Cheetahs were found wanting in all three tries.

In Bosch's opener, an Aphelele Fassi grubber opened up the space that the Sharks exploited.

Nohamba's 31st minute try was a case of the Sharks again moving the ball wide, with Nohamba collecting Mvovo's pass before making an unchallenged dash for the left-hand corner.

The Sharks' third try was simple and effective, with the effervescent Fassi running a superb angle that opened up the Cheetahs defence.

Mvovo ran the straight line that unlocked the door towards the tryline.

While Pokomela scored a straight-forward try from an overlap, the only other points the Cheetahs had to show for their efforts were two Tian Schoeman penalties.

The Cheetahs were also guilty of impatience and over-elaboration with ball in hand when in the Sharks 22.

The Sharks increased their lead by another three points with 44th minute Bosch penalty.

The try-fest then started when William Small-Smith scored an unconverted 47th minute try to narrow the deficit to 23-16. In what was nothing short of bizarre, the Sharks had assistant coach David Williams removed from the field in the 55th minute for dissent. They had also lost Fassi to injury, robbing them of one of their attacking fulcrums.

The Cheetahs then scored three minutes later through Ruan Pienaar after a quick line-out, from where Dries Swanepoel's pass found Clayton Blommetjies.

The fullback cut a swath through the Sharks defence and passed to try-scorer Pienaar.

With the score at 23-all, Blommetjies again cut up the Sharks defence, with hooker Joseph Dweba scoring the 62nd minute try that gave the Cheetahs the 30-23 lead.

The Sharks though remained patient and disciplined, with a 14-phase period being rewarded with a 67th minute Bosch try.

That's where the Sharks' contribution to the game ended with the Cheetahs running in 70th, 74th and 77th minute tries by Pokomela, Retshegofaditswe “Ox” Nche and Jasper Wiese to cap off a powerful second half. They're going to be a menace in next week's final.

The Lions reached the Currie Cup final, but their performance hardly carried the promise of gold against a pragmatic Griquas side here yesterday.
Sport
2 years ago

Boks fly on the wings of fitness and form

Already billed as potentially the most open and keenly contested Rugby World Cup (RWC), this year's tournament in Japan should reveal if burgeoning ...
Sport
2 years ago

Coach Rassie cautious but there's nothing 'Mamma Mia' about Italy

The peak on which the Springboks have fixed their gaze for more than a year ahead of the Rugby World Cup (RWC), has been their long-time Pool B ...
Sport
2 years ago