WATCH | Springboks vs the All Blacks: How did the SA players rate against New Zealand? 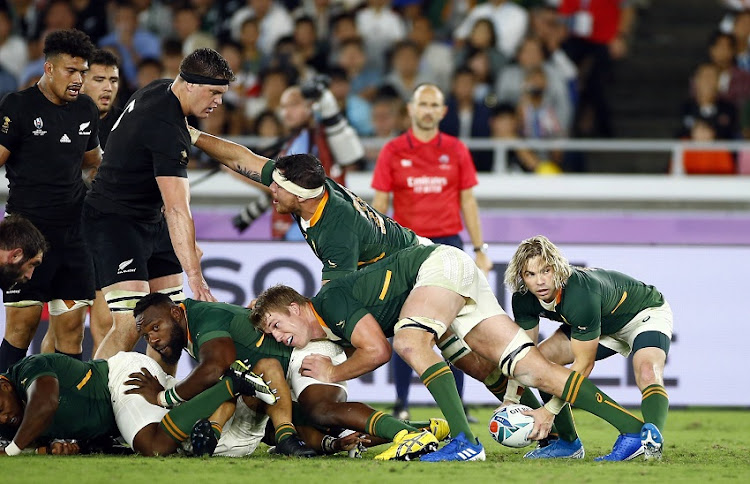 After the All Blacks beat the Springboks 23-13 in a titanic clash against in the greatest traditions of rugby’s fiercest rivalry; we score the Bok players’ performances out of 10 from Yokohama.

In a bus full of Kiwis here. I tried (and partly succeeded) in getting them to admit that the @Springboks should have won the game v @AllBlacks last night.

Willie le Roux: 5 – Not a great day for the experienced fullback. He was jittery under the high ball in the first half and despite some promising forays on attack‚ his final ankle-high pass to Cheslin Kolbe cost his team a try.

Cheslin Kolbe: 9 – The diminutive right wing is not just about jinking runs. His positional play‚ reading of opposing attacks‚ skill and bravery under the high ball and on defence were astonishing. He just gets better and better and has become the most important outside back in the team.

Lukhanyo Am: 5.5 – Did very little wrong and made his usual good reads on defence. But he was anonymous on attack and failed to stamp his authority on the game.

Damian de Allende: 6 – The bruising centre was asked to carry into contact and did it effectively‚ occasionally giving the Boks go-forward. But until he looks for more options than contact‚ his effectiveness remains limited. Strong on defence.

Makazole Mapimpi: 4.5 – One superb tackle from behind on Richie Mo’unga notwithstanding‚ this was a day to forget. Mapimpi was caught out on defence often‚ either too narrow to combat the kick-pass or too flat-footed to stop Sevu Reece or flank Ardie Savea stationed in the tramlines.

Handré Pollard: 5 – Lost a high ball leading to one All Black try and missed a routine penalty attempt. But he also asked questions of the All Black defence when the Boks assaulted the ramparts in the second half and made some raking touch finders.

Faf de Klerk: 5 – Shut down some NZ attacks with typically clever reading of the play and also showed some glimpses of his ability to find holes in the opposition defence. But his passing was inaccurate at crucial times and his tactical kicking wayward.

Duane Vermeulen: 6.5 – It was a game of two halves for the man making his 50th Test appearance. Struggled in the first half and failed to take a high ball‚ leading to George Bridge’s opening try. But after the break he was immense‚ busting tackles and making yards. If only he did it for 80 minutes.

Pieter-Steph du Toit: 8 – As usual Du Toit was indefatigable on attack and defence. He shut down ball carriers with brutal defence and made telling metres in possession. His lineout work was also superb. Another commanding performance.

Siya Kolisi: 6 – The Bok skipper was a strong presence in the loose and did some good work close to the ruck. But his lack of game time showed as he faded quickly in the intense battle. Subbed in the 50th minute.

Franco Mostert: 5.5 – Never stops running and working but this was his most ineffectual outing for some time. He wasn’t able to impose himself physically and was outshone by the opposing second row.

Eben Etzebeth: 7 – He carried strongly and more than once forced three All Black defenders to bring him down. Did his primary work well and pitched in on defence. An expectedly strong performance from the big man.

Frans Malherbe: 6 – Scrummed well and was unlucky not to get more change from referee Jerome Garces in the first half. Often had Joe Moody buckling‚ only for the All Black loosehead to escape punishment. Did his work in the loose too.

Malcolm Marx: 6 – Hit his targets in the lineouts‚ effective in contact and mostly solid on defence. Failed to make his usual impact at the breakdown though.

Steven Kitshoff: 6.5 – Was asked to carry into contact more than any other tight forward and did it effectively. Made some good tackles on the fringes but failed to get the reward for his edge in the scrums.

Jesse Kriel: 5.5 – Used his pace to cause problems in the All Black defence and made his tackles.