ANALYSIS | Warrick Gelant stood head and shoulders above the rest 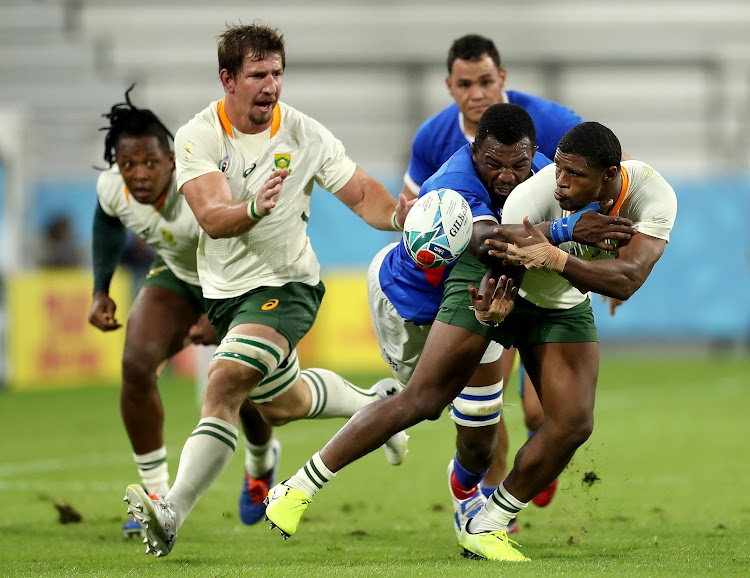 Warrick Gelant scored a try of his own and created two more.
Image: Springboks/Twitter

With the competition still coming to terms with Japan’s shock win over Ireland, South Africa romped home 57-3 in the so called African Derby to get their Rugby World Cup (RWC) campaign belatedly off the ground here on Saturday.

We rate the players.

Was full of running in a game that was always going to suit his attacking instincts. Created two tries, including his own.

The right wing didn’t see as much of the ball as he would’ve liked but enjoyed some good runs and was solid defensively.

Tidy outing where his distribution and running skills were on show. Finished off the try of the match after the halftime hooter.

A lot of intense, hard running that made metres. Was the main carrier into contact and broke the line several times. Showed some good pace when he found gaps.

Needed a confidence boost after a difficult match against the All Blacks last week and relished the space and time he had on the ball. Scored two tries.

Poor match riddled with errors off a solid platform any flyhalf in the world could only dream about. Didn’t do his prospects of featuring against Italy any good.

Had a comfortable ride behind a dominant pack. Service was snappy and accurate but his kicking game was a little erratic.

The skipper enjoyed being able to run and offload and he did it effectively. His offload for Am’s try was a beauty.

A virtually anonymous match from a man who should have relished the contest. Made one significant run in the loose but was otherwise unseen.

Did good breakdown work and was strong defensively. A solid workman-like performance.

Was one player to advance his cause to start against Italy with a meaty display. His carries were strong, he won seven lineouts and made some big tackles.

Not far behind De Jager in terms of his display. Some big carries and one deft offload, as well as a good shift on defence.

Thee tighthead buckled the Namibian scrum at almost every opportunity. Was immense in the set piece but a little quiet in the tight loose.

Scored two tries off the back of rolling mauls and was strong in the tight exchanges. Good on defence too.

A big part of the dominant scrum and was industrious close to the fringes when carrying into contact.

Made a positive impact when he entered the fray just before the hour mark. Ran good lines and hit contact hard. Scored a try too.