Springboks put Namibia to the sword 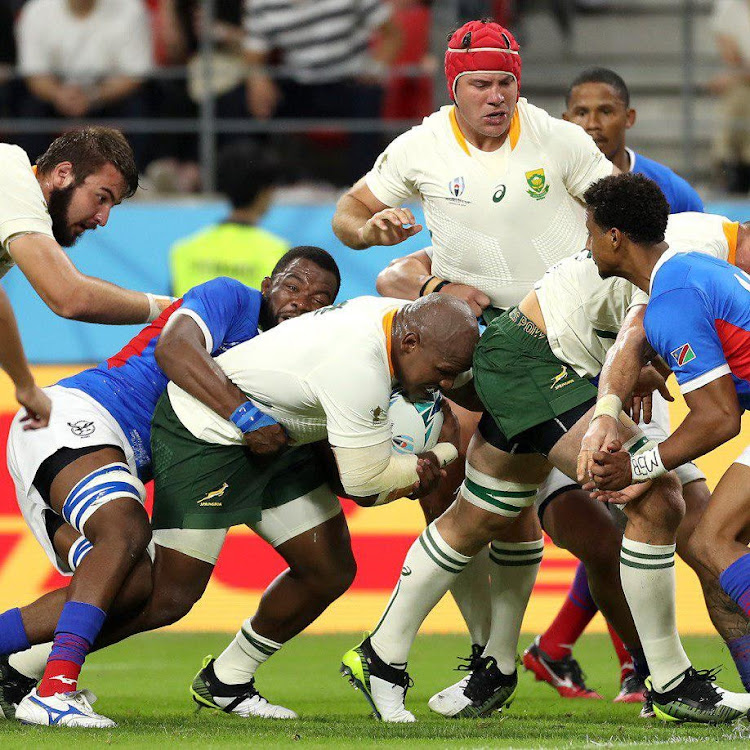 With the competition still coming to terms with Japan’s shock win over Ireland, South Africa romped home 57-3 in the so called African Derby to get their Rugby World Cup (RWC) campaign belatedly off the ground here on Saturday.

After defeat to the All Blacks in Yokohama a week ago coach Rassie Erasmus was looking for a ruthless and clinical performance.

The Boks’ brains trust wanted to spread game time in this match but they were also keen to see to what extent the team could stick to their blue print against rag-tag opposition hell bent on loosening things up.

The Boks largely stuck to script and purpose but there were times they lost shape against a team largely made up of amateurs.

Early on the chasm between the fifth and the 23rd ranked teams in the world appeared so great Namibia may well have been called North Africa.

It was a mismatch but to the Namibians’ credit they didn’t entirely drop their bundle.

The difference in class was clear from the start. The Springboks established superiority in the scrum and reduced the Namibians to rubble. Poor Namibia scrumhalf Eugene Jantjies had a torrid time trying to mop up behind a retreating pack.

They had set up camp deep inside Namibian territory during the opening 10 minutes and the only time they relented was when the game necessitated a kick-in after the opening try by Bongi Mbonambi.

The hooker profited richly from the Springboks’ driving maul, an element of their game that was a little blunt against the All Blacks a week ago. The Namibian maul defence should perhaps however not be compared with that of the Kiwis on account of deficiencies in application and technique.

Captain on the day Schalk Brits grew more conspicuous as the match wore on.

Locks Lood de Jager and in particular RG Snyman proved willing and able ball carriers often driving into the heart of the Namibian defence. Herschel Jantjies’ snappy service further ensured that the gains made by the big men were presented to the backs on the best possible platform.

He and namesake Elton again operated well in concert and with such a surfeit front foot ball even Frans Steyn could lengthen his stride occasionally. He even delivered one telling cover tackle.

Makazole Mapimpi looked for work and often found it, while Warrick Gelant’s handling was at times poor. He however, remains devilishly good at ghosting into space.

Namibia got on the board while they were a man down through a Cliven Loubser penalty in the 24th minute. No 8 Adriaan Booysen had been sin-binned minutes earlier but the Namibian profited from their enterprise in the back division.

The Boks however didn’t have to move to far from their marauding pack to make inroads. They played with cohesion and precision but it was against a pack that offered little by way of resistance.

Their campaign is off the ground but they have a more pressing engagement against Italy looming in Shizuoka on Friday.