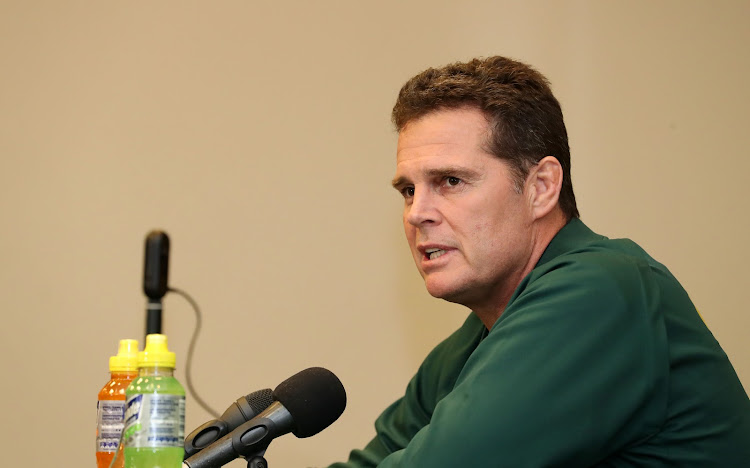 Erasmus has also gone for a six‚ two split on the bench hoping to get similar forward output either side of the half time whistle at the Shizuoka Stadium.

With the Italian forward play a much hyped topic this week‚ Mtawarira comes in to lend experience‚ the sheer height and weight of De Jager earned him a place‚ while Mbonambi cracked the nod for consistently occupying the higher end of the performance scale this season.

The men who did duty against the All Blacks but who lost out in the starting line-up this time are Marx‚ Steven Kitshoff and Franco Mostert are all on the bench.

“Trevor (Nyakane)‚ Bongi and Beast have given us great performances at scrum time‚” reminded Erasmus. “The physical challenge will be at scrum time‚ will be at mauling‚ and I think having a bench like this after Bongi‚ Beast and Frans (Malherbe) will give us some benefit in the second half.

He then extolled the virtues of De Jager who delivered a man of the match performance against Namibia in the Boks’ previous game.

“Lood is exceptional at line-out time. Having him in charge of that in the short six-day turn around was the way to go. Then you have Franco coming on with his work rate. It makes that switch really easy for us. Hopefully we will reap the benefits.”

Erasmus was keen to create a near two-pack scenario in his selections. “We are actually spreading the load‚” said the coach. “When we look at the stats the forwards have been doing the taxing stuff. By picking almost to full packs we will spread the load more and that will help us in the next four-day turn around.

The rain that is excepted in Shizuoka on Friday night also played a role in the selections.

“We got the weather wrong in the first two games. We thought we’d get wet weather but the conditions are as if it is wet weather. It still looks like we’ll get a lot of rain on Friday.

With only Herschel Jantjies and Frans Steyn on the bench among the backs‚ the latter will be required to cover a range of positions.

“If we get three injuries in the backline we’ll have to be very creative. We’ve got some plans there. In selecting a RWC squad we thought we need someone like Frans who can cover 10‚ 12 and 15. It is a luxury. Damian (de Allende) has played 13 for us a lot. Cheslin (Kolbe) covers wing and Willie (le Roux) covers wing and Faf (de Klerk) can be a high level flyhalf‚ if you have to do that.

“We are versatile enough backline combinations to cover that.”