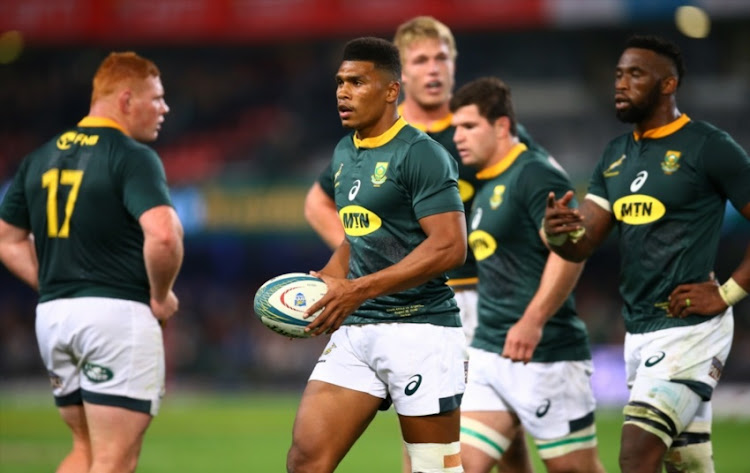 Willemse offers Erasmus the X-factor and variety in attack‚ not that‚ that will be the Springboks’ go-to setting once they hit the knock out stages of the tournament.
Image: Steve Haag/Gallo Images

Once he arrived here it didn’t take long for him to get his second and only start in the Springbok starting line-up for Tuesday’s Test against Canada.

Coach Rassie Erasmus will be keen to see how sharp Willemse is having only recently returned from a long lay-off due to a knee injury.

Willemse offers Erasmus the X-factor and variety in attack‚ not that‚ that will be the Springboks’ go-to setting once they hit the knock out stages of the tournament.

They are likely to rely primarily on their forwards to bash it up‚ while their halfbacks and fullbacks will kick endlessly for favourable territory.

They are likely to attack through narrow channels which means players like Cheslin Kolbe‚ Makazole Mapimpi‚ and indeed Willemse‚ should he crack a spot in those pressure games‚ are going to have to make the most of limited opportunities.

It is exactly for that reason Erasmus needs a player like Willemse in his armoury when the big men fail to make headway - when muscle has to make way for magic.

Willemse‚ who joined the team last week as a replacement for Jesse Kriel‚ will run out at fullback on Tuesday after starting in that position last year against England at Twickenham.

The Springbok starting team assembled to play Canada on Tuesday are on notice.
Sport
2 years ago

A week later he made his last appearance in the Green and Gold against Wales in Cardiff as a substitute on the wing for Aphiwe Dyantyi.

Dyantyi of course‚ has fallen by the way side and it looked as if Willemse was also going to miss the RWC after he didn’t make the initial squad still trying to shake off injury.

“The first few days were challenging coming over from England‚” said Willemse about his first week in Japan after his short stint on loan with Saracens.

“It has been challenging especially in the warm ups. The conditions‚ the humidity is something the boys are quite used to by now. We need to adapt in each game.

“But all ready to go now. I’m really excited to play. I’d been out of the mix for quite some time with the injury. I was out for three months. I’ve got that hunger and I want to be back on the pitch again. It was good to get some game time for Sarries.”

Willemse‚ who spent his formative years in the No 10 jersey‚ has too frequently switched between that position and fullback and some of his appearances for the Boks last year were on the wing.

“I’ve been playing No 10 and fullback for Sarries. In one game I got off the bench and played at 10 and one I started at 10 and moved to fullback.

“I’ve got different roles here‚” he said about being with the Boks.

“I’m available to play anywhere the coach picks me.”

With the humidity and resultant wet ball still making life difficult for the players‚ Willemse is bracing himself for a test under the high ball against Canada.

“Coach (Mzwandile) Stick has been taking the boys to do the work. The work the boys have been putting in has paid off. I’m looking forward to the aerial battle. It is something we pride ourselves on.”

A solid performance‚ not just under the high ball‚ but a generally assured display‚ will go far to opening up the possibility of Willemse playing a starring role deeper in the tournament..

Jesse Kriel is out of the Rugby World Cup (RWC) and will be replaced by Damian Willemse.
Sport
2 years ago

The austere financial times South African rugby clubs face has been highlighted in recent weeks with the news of some high profile players taking up ...
Sport
2 years ago

Willemse to play flyhalf this weekend?

Western Province utility back Damian Willemse trained at flyhalf on Monday for their must-win final Currie Cup pool match against the Free State ...
Sport
2 years ago