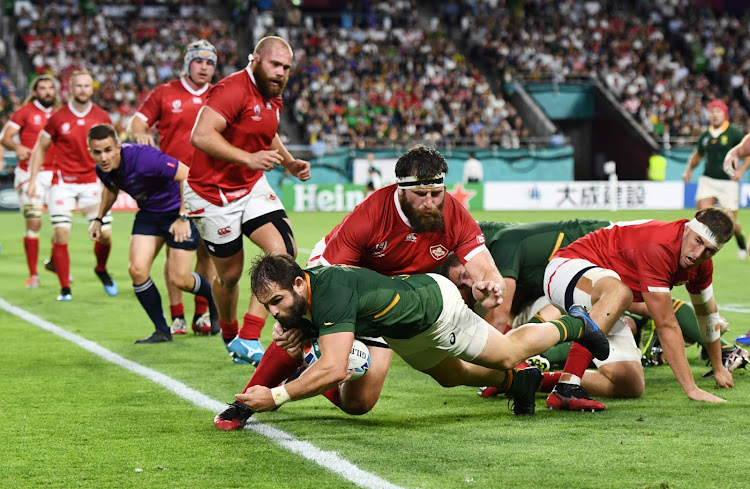 Cobus Reinach scored the fastest Rugby World Cup (RWC) hat-trick to help propel the Springboks to a 66-7 win over Canada and cement their place in the quarterfinals.

By the 22nd minute the dynamic halfback had crossed Canada’s tryline to strike off the record books Wallaby Chris Latham’s three-try effort that came inside 25 minutes against Namibia in 2003.

Reinach wasn’t alone in putting the ponderous Canadians on the back foot early on. The Boks were rampant in the opening half-hour rattling 40 points without reply.

Matters were compounded for the men in red when Josh Larsen was red-carded for recklessly going into a ruck with a leading left arm into Thomas du Toit.

It deepened the suspicion that a rout was on the cards but the Boks made no headway for the remainder of the half until Canada’s scrumhalf Phil Mack threw a meek pass that found the hands of the alert Frans Steyn.

It was Steyn’s first try for the Boks in seven years. The last time he scored was also an intercept try‚ but on that occasion it carried more weight and was potentially match-saving in the 16-all draw against Argentina in Mendoza.

Touching words from @Springboks captain @siyakolisi1 as he thanks Japan for the amazing support at #RWC2019#RSAvCAN pic.twitter.com/STAHoRwo4e

While Canada were at times listless‚ the Boks were lithe. They hardly looked like a team playing under a cloud.

In fact‚ playing under a roof in conditions surprisingly less humid than they had experienced earlier in the tournament‚ they dared and dazzled and thoroughly put Canada to the sword in the opening half.

With a less greasy ball they were able to bring their offload game and they soon hit their stride. No-one’s stride was longer and more purposeful than RG Snyman’s in those initial stages.

For a large fella he as a gift of ghosting into gaps before setting off with loping strides.

The Canadians would have been forgiven if they thought they ran into Sasquatch. The man mountain proved a hugely influential ball carrier. His awareness of the moment to offload and ability to do so under duress makes him a very valuable asset in this Springbok team.

That ability may yet see him play a bigger role later in the tournament.

Even tighthead prop Vincent Koch had a spring in his step in the Boks’ opening burst. Unsurprisingly the same applied to hooker Schalk Brits‚ whose handling was a delight.

He was far less sprightly when he left the field in the 58th minute. Coach Rassie Erasmus had hoped to play him for as long as possible but he picked up a knock that necessitated the deployment of Malcolm Marx.

It was Reinach‚ however‚ who helped put the Boks in an impregnable position early on. He ran like a man who was trying to break the shackles. In his case perhaps rid himself of the cobwebs due to limited activity.

It was pretty clear after his show-and-go allowed him to scythe through a gap well inside Bok territory he would take some stopping.

He completed his hat trick thanks to a perfectly weighted Elton Jantjies crosskick that Warrick Gelant ran onto at speed. Gelant teased the defence before offloading to Damian de Allende who in turn found support on his inside from Reinach‚ who showed wonderful dexterity in bringing the ball under control before running clear of the defence.

His job was done by the 51st minute when he was withdrawn from the action. His halfback partner Elton Jantjies had the ball on a string whenever he had to apply his boot. When he kicked into space it served to tantalise and tease. He slotted eight of his 10 conversion attempts.

This was the last opportunity for the players on the periphery to make a statement and play themselves higher in the estimation of the coach ahead of the knockout stages. By and large they all did.