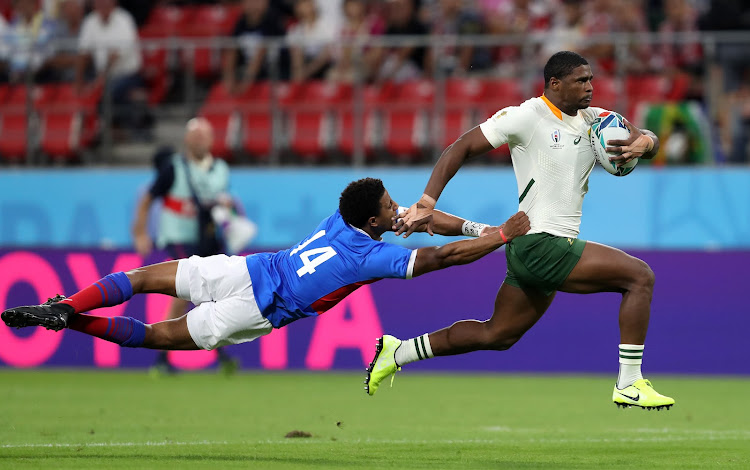 Warrick Gelant has a simple to-do list while the Springboks have some downtime in preparation of their Rugby World Cup (RWC) quarterfinal Sunday week.

“The first thing is sleep. I love to sleep. I’m gonna get a lot of sleep the next couple of days‚” said Gelant with steely determination perhaps still unaware that typhoon Hagibis is on Japan’s doorstep.

“I’m not sure what the guys will do but I’ll check in with Herschel [Jantjies]. He’ll probably gonna sleep as well‚” Gelant added.

The Boks would have had 12 days between their last pool match and the quarters.

“I know family will be arriving. Wives and kids. We have to sacrifice a bit to come back for the knockout stages.”

Gelant‚ who was moved to the wing to accommodate new arrival Damian Willemse‚ is convinced the Boks got what they sought in the 66-7 win over Canada.

“It was a bit of a mixed team. It’s about our structures and processes. We know what they are‚” he said.

“We tried to chase that against Canada as hard as possible. At times it got loose. At times spaces opened‚ especially when they got the red card.

Gelant admits operating on the wing removed him from his comfort zone.

“It is new for me. I’ve never actually played wing‚” said the player who actually started his second Test on the left wing and scored a try against Wales in Cardiff in 2017.

“I prefer fullback. I want to be part of decision-making. That’s what I prefer. To receive the ball in space.

“As a fullback I try and be a complete fullback‚ the complete rugby player. When we get more difficult opposition we need to be able to attack with ball in hand. Aerially‚ and tactically. We strive for that.”

At one point during the Test against Canada the Boks had Elton Jantjies‚ Handre Pollard‚ Frans Steyn and Willemse on the field. It is rare to have four flyhalves in the same backline at once.

“It worked well last year when Elton came off the bench and Pollard moved to 12. It just brought a different dimension.

“With Frans on the field it can be quite dangerous. We must just find the right combination. When to penetrate‚ when to go wide. It is something special. It is a great weapon to have.

“Some guys would want to keep it tidy but you might get that one opportunity and it will be great to have those four guys. It could be something special.”

Speaking of Steyn‚ the younger players have warmed to his forthrightness and occasional shenanigans.

“Frans brings a lot of composure‚” said Gelant. “He’s won this thing before. It is nice to have a guy like that who has played for so long. For young guys like us we just learn from him‚ see how he does stuff.

“He’s so calm. He makes us calm around him. At the end of the day we all have a common goal. That’s the nice thing about it.

“He is a funny guy. A nice guy to have around.”

Gelant would not be drawn on who he prefers as quarterfinal opponents for the Boks.

“It doesn’t matter. To win this you have to beat the best.”