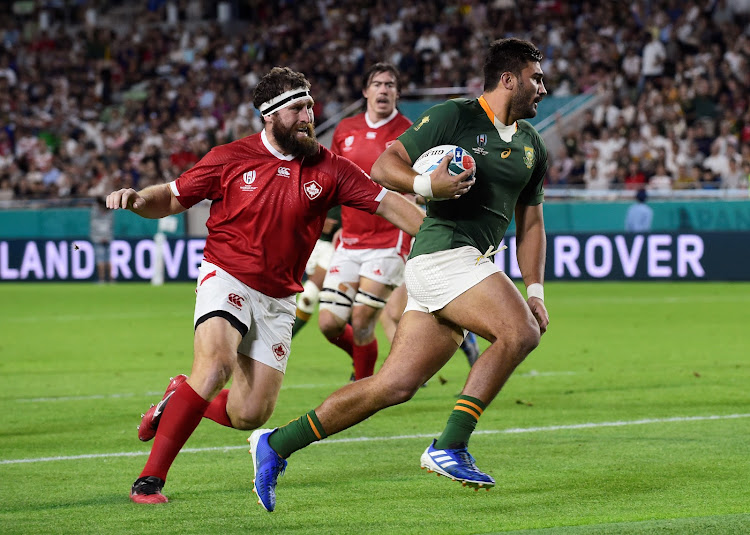 Typhoon Hagibis is reportedly bringing the strongest winds and the heaviest rain to Japan for 60 years.

For Damian de Allende however‚ some 350km to the west of the storm‚ the wind and rain that prevailed at the Springboks’ practice on Saturday morning reminded him of Cape Town.

“Yes‚ it actually does‚ with the wind a bit. We are expecting more rain and wind‚ so hopefully we won’t be out here for that part of the weather‚” he said.

“But it’s been lekker [good]. We prepared to train at the indoor facility‚ but we couldn’t get there.

“So‚ it was a bit unexpected [to train outside]‚ but it was nice. It’s always nice to get into the rain a bit‚ and actually test your skills and the intensity in weather like this.

That of course will make for a great leveller.

Higher-ranked teams might get blown off course when simple pursuits like passing and kicking become a lottery.

“Yes‚ it is a lot different. It just feels‚ when you play in the rain‚ you are almost a little bit slower – so you have a lot less time on the ball.

“You feel like it is half-a-step slower‚ and it also feels like the defence comes a little bit harder‚ because you have less time on the ball.

“It’s very good that we got a chance to actually train in the rain and see how we handle ourselves in the conditions‚” remarked De Allende.

He was a little coy about how his game has developed since the last Rugby World Cup (RWC). He and Jesse Kriel were starting to develop a formidable midfield pairing.

“Not just me or South Africa‚ but the whole of world rugby has improved immensely.

"Sometimes Handre [Pollard] and myself watch old World Cup games from 2015‚ and back then there was absolutely no line speed on defence. And the skillset wasn’t under pressure or anything like that.

“We’ve all developed in that sense‚ where we can play under that kind of pressure – where guys are in your face and making decisions under pressure.

“The game has gone a bit more structured as well. I think that’s where you’ve got to learn and accept that you are not going to get a lot more turnovers‚ and there are going to be a lot more kicks on you.

“So it’s a lot more structured attack‚ and that’s where we have developed.”

In more recent times he has forged a partnership with Lukhanyo Am. They’re as steady as the coach could wish them to be.

“Yes‚ it’s going nicely. We played together a bit last year‚ but I think we are starting to get a real feel for each other‚ and a lot better understanding.

Even before its arrival super typhoon Hagibis has cast a dark cloud over the Rugby World Cup (RWC).
Sport
2 years ago

Warrick Gelant has a simple to-do list while the Springboks have some downtime in preparation of their Rugby World Cup (RWC) quarterfinal Sunday week.
Sport
2 years ago