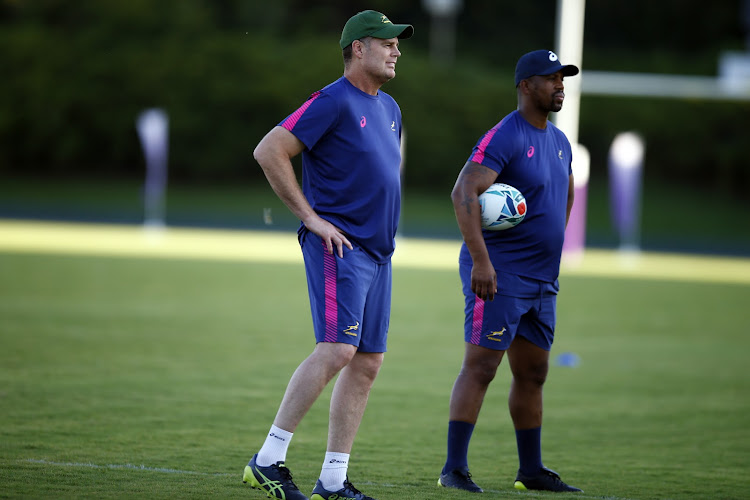 He also pointed to Japan’s speedy wings Kenki Fukuoka and Kotaro Matsushima who tend to bring things to speedy resolution.

“Their coach Jamie Joseph referred to them as Ferraris‚” Stick reminded at the team’s hotel in Tokyo’s high rise district.

“If you look at the background of their coaching staff Jamie Joseph and Tony Brown are both from New Zealand.

"We know their coaching philosophy is ball in hand. Japan also reminds me of Argentina who has more time with ball in hand. They are very skilful‚” said Stick.

That he would mention those two countries is no coincidence.

After stepping away from the All Blacks job Rugby World Cup (RWC) winning coach Sir Graham Henry was seconded to Argentina to help knock them into shape for their early existence in the Rugby Championship.

He advised them then to drift from their game that was heavily reliant on the boot and forward dominance‚ to one in which they can score more tries.

They warmed to the new challenge.

Much of this week the talk has revolved around how the Springboks will contain Japan’s high speed and energy game.

“You saw the speed and the tempo of how they played the game‚ especially against Scotland which was a proper performance‚” said Stick.

“We are training very hard to keep up with that high tempo game. We have to complement them and say they are a very skilful side.”

The question is whether the Boks have the staying power to go toe-to-toe with the fleet footed Japanese‚ while deploying strategies that will allow them to inflict body blows on the hosts.

It was noticeably how Japan lost some of their zing and zest in the second half against Scotland and the Boks will hope to have absorbed the hosts earlier frenzy on Sunday.

Part of the Boks offensive strategy this week will almost certainly revolve around going to the air and contesting the high ball.

That can be risky especially when the ball bounces Japan’s way.

Execution and a good chase line will be key to how the Boks can reap benefit from the high ball deployment.

It is a topic that left Stick a little uncomfortable.

“As a coaching staff we still have to finalise how you are going to play them‚" he said.

"They are well coached. I’m sure they will manage their game whether we keep the ball in hand or whether we want to kick.”

He wasn’t going to reveal any Bok secrets but acknowledged how the Boks will have to rise to the challenge of not just playing the Brave Blossoms but also blocking out the patriotic fervour the Japanese will increasingly unleash in the build-up to Sunday’s clash.

“The whole country is excited and behind them‚" he said.

"Playing against the host nation we know they are going to be playing with a lot of passion. The supporters are going to be behind them and we’ve already noticed the vibe at the stadium.

“We know they are going to be passionate and that they have pride in their team. But their supporters have also been good to us. The hospitality has been great.

“Kwagga Smith has his own supporters club. His face was on the jersey of these supporters.”

World Rugby neatly sidestepped entirely avoidable brouhaha in their deployment of referees for the quarterfinals of the Rugby World Cup (RWC).
Sport
2 years ago