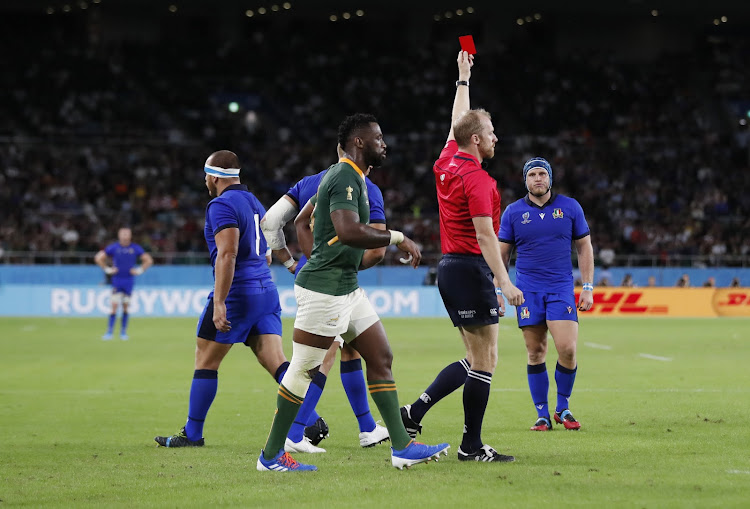 World Rugby neatly sidestepped entirely avoidable brouhaha in their deployment of referees for the quarterfinals of the Rugby World Cup (RWC).

Barnes will be handed the whistle for the Springboks’ clash against Japan on Sunday night at the Tokyo Stadium.

Garcès will officiate his second RWC quarterfinal as England face Australia in Oita on Saturday‚ while Owens will take charge of world champions New Zealand against Ireland at Tokyo Stadium on the same day.

Peyper will be in charge of his 50th Test when Wales play France in Oita.

A beautiful moment at #RWC2019 as Samoa bow to fans to thank them pic.twitter.com/iWVip1ICFP

Although they won’t say so publicly‚ the Springboks will be mightily relieved they did not get Garcès in their quarterfinal.

The Boks have won just four of the 14 Tests in which Garcès was the 31st man on the field.

In their last 10 Tests with Garcès in the middle‚ the Boks have won just once.

He was the referee when the Boks lost to the All Blacks in Yokohama on the opening weekend of the tournament.

The Boks will be almost as relieved that they have Barnes.

Of the 14 Tests he took the whistle in a match involving the Boks‚ the Green and Gold were triumphant on 11 occasions.

The All Blacks will also breathe easy.

Had Barnes been assigned to their match they would no doubt have been drawn into a debate about how the Englishman failed to spot a forward pass that led to what turned out to be a match winning try for France by Yannick Jauzion in the quarterfinal in Cardiff in 2007.

That was in fact the last time the All Blacks have lost a match at the RWC.

World Rugby announced the match officials following a full review of performances over the 37 pool matches.

The four referees have 285 Test appearances between them as referees.

World Rugby chairman Sir Bill Beaumont said: “They are the best of the best and have played their full part in what will be remembered as an incredible pool stage.”

Japanese rugby supporters exploded with joy after the Rugby World Cup (RWC) hosts made history by reaching the quarterfinals of the tournament for ...
Sport
2 years ago

Typhoon Hagibis has come and gone, leaving World Rugby to pick up the pieces and reassemble its credibility.
Sport
2 years ago