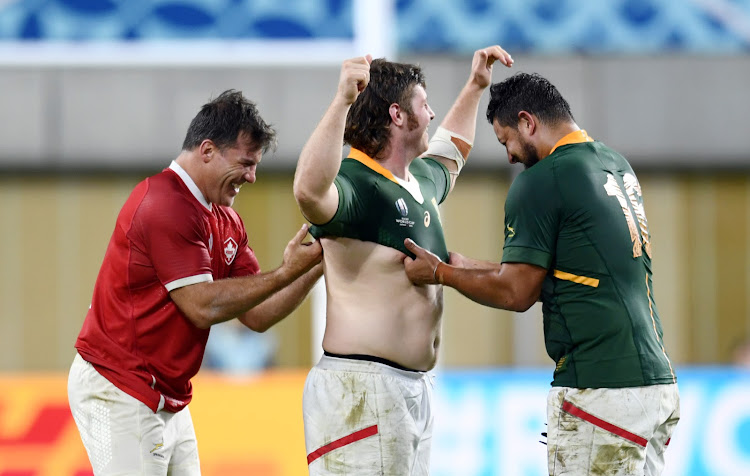 The only blight on their copybook in the 320 minutes they’ve played so far in this Rugby World Cup (RWC)‚ says Springbok coach Rassie Erasmus‚ were the two tries they conceded in the space of four minutes against the All Blacks.

That still irks‚ if not‚ rankles in the Bok group.

They could have gone into their RWC quarterfinal against Japan unbeaten this year had they not let in tries by George Bridge and Scott Barrett.

Much‚ of course‚ has happened in this tournament since that crunch opening weekend clash in Yokohama with the All Blacks predictably going on to top the pool and the Springboks pretty much keeping up their end of the bargain by finishing runners up.

Japan’s path to winners of pool A‚ however‚ was a serious diversion from the script.

The challenge Japan pose is very different from the one the Boks may have had against say‚ Ireland‚ but the coach knows those few minutes in which the South Africans lost focus and intensity against the All Blacks cannot be repeated in the knock-out stages‚ irrespective of the opposition.

The Boks may have played with greater levels of control assuredness since but in Namibia‚ Italy and Canada they didn’t face opposition that have required them to reach deep inside.

They could afford to take their foot off the pedal after a splendid first half against Italy‚ while the greasy ball gave them cause to yield slightly to the conditions against Namibia and Canada.

Japan‚ by contrast‚ have had to bust the gut against Ireland and Scotland in this tournament and while the Boks are far more attuned to playing big matches on a well-lit stage‚ the hosts would have been required to operate near optimum levels almost all the time in this tournament.

In that sense they perhaps go into Sunday’s match with a mindset better adjusted to performing a high wire act.

Japan have lived on the edge of late and the Boks have not.

It has been almost a month since the Boks have had to scale those heights against the All Blacks.

In fact‚ it is debatable whether the Boks were even required to dig that deep when they played their warm-up match against Japan in the first week of last month.

Japan were well beaten in that match but have been barely recognisable in this tournament.

Yes‚ the conditions were more trying that evening but they’ve played with far greater intensity since the start of this tournament.

You are almost left with the nagging sense they did not show the Boks all that is in their arsenal that evening.

“The way Japan has improved is tremendous‚” noted Erasmus.

“They beat Ireland and Scotland and they topped the pool. They’ve done it in style. They have improved but we have improved as well since we played that game.

"Apart from four minutes against New Zealand where we conceded two tries‚ I thought we played really good rugby and scored a lot of tries.

“It will be great to see on Sunday who made the most improvement. There are big expectations in the quarterfinals. Who handles the pressure the best and the expectations.”

Of course the Boks would not be drawn into a debate about whether Japan kept their powder dry in that warm-up game but Erasmus is confident he has seen enough of the Brave Blossoms to know what to expect on Sunday.

“We know what they are about and what they bring to the game‚” said Erasmus.

“I think the weather conditions have changed.

"The humidity is gone and that big factor that the humidity brought to the playing conditions has evened out.

"That isn’t a benefit anymore. You have two teams that play a very different style of rugby.”