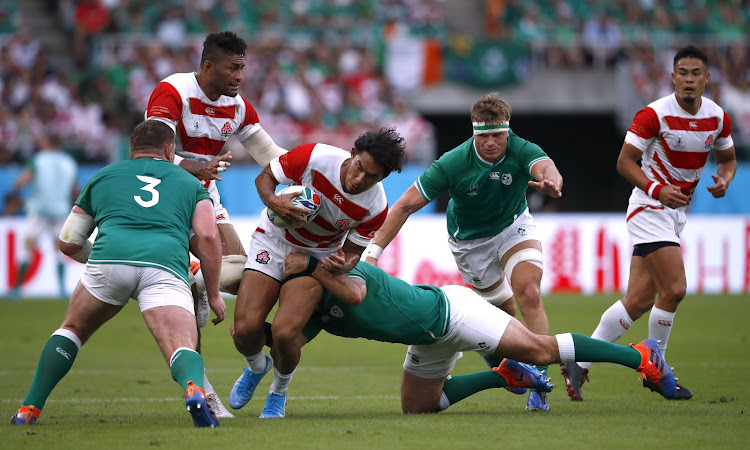 Japan's Ryohei Yamanaka, who was influential in the pool stage win over Ireland, in action with Ireland's CJ Stander and Tadhg Furlong.
Image: REUTERS/Edgar Su

Much like the Springboks a day earlier Japan has largely stuck to their guns in selection making just one forced change to their team that beat Scotland for Sunday’s Rugby World Cup (RWC) quarterfinal.

Ryohei Yamanaka comes in at fullback to replace William Tupou‚ who drops out of the 23.

Tupou suffered a concussion in Japan’s win over Scotland at Yokohama with sprightly winger Lomano Lava Lemeki named among the replacements as cover for the back three.

Significantly‚ however‚ there are five changes to the Brave Blossoms side who lost to 41-7 to South Africa in a World Cup warm-up game.

Japan‚ it is widely anticipated‚ will mount a far more serious challenge when they meet the Springboks at Tokyo Stadium on Sunday.

Moreover‚ in Kotaro Matsushima‚ Shota Horie‚ Luke Thompson and Michael Leitch‚ Japan have five survivors of the team who upset the Springboks in Brighton at the 2015 RWC.

Lock Thompson will become the first player to play 14 RWC matches for Japan‚ extending his record‚ while Leitch will play his 13th match and hooker Horie his 12th.

Naturally‚ flyhalf Yu Tamura‚ the tournament’s top scorer thus far with 48 points and joint top try-scorer Matsushima with five are in the mix.

There had been concern over the availability of loosehead prop Jiwon Koo who left the field against Scotland with a rib injury but it has healed enough for him to make a start.

Japan have extra incentive to down the Springboks

As if they need to be stirred up into greater frenzy‚ Japan will have extra incentive to down the Springboks in the Rugby World Cup (RWC) ...
Sport
2 years ago

The only blight on their copybook in the 320 minutes they’ve played so far in this Rugby World Cup (RWC)‚ says Springbok coach Rassie Erasmus‚ were ...
Sport
2 years ago