Japan coach Joseph has ‘deep and enduring respect’ for Springboks 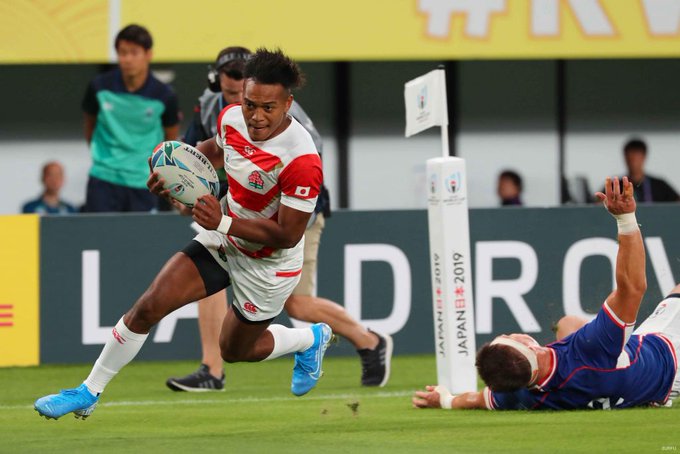 Kotaro Matsushima will need to produce something special to get Japan over South Africa in the Rugby World Cup quarterfinals.
Image: Japan Rugby/Twitter

He grew up and played in an era in which the Springboks and the All Blacks’ rivalry was the biggest rugby ticket in town.

It was sheer box office but since readmission the rivalry has lost some of its zing as the All Blacks started to dominate.

Only recently has it been restored.

“Personally as an ex-old rugby player‚ South Africa is a team that I respected the most as a player and that’s because of the close rivalry over many years between New Zealand in Test matches in the past‚ something we got brought up with as kids‚” Joseph said.

“I really understand the rivalry and getting the opportunity to play for the All Blacks three or four times against South Africa was always an awesome occasion.

“On top of that you know what you’ll always get playing South Africa and that’s the sort of messages we’ve been telling the players.

"It’s a bit different from 20 years ago‚ fast and physical now.

“Years ago was totally different‚ the brawls and all the stuff going on and we gained as much as we got but there was always a really respectful Test match.

"And when the rugby was finished‚ done and dusted‚ we’re all just good mates playing rugby together.”

That will have to make way for hostilities on Sunday when Joseph’s Japan clash with the Springboks in a Rugby World Cup quarterfinal here in Tokyo.

The Brave Blossoms have captured the imagination of the nation and television viewing records have tumbled as they’ve progressed through the tournament.

Japan and Joseph have had to draw from far and wide to make this team competitive.

Former Cheetahs and Bulls flanker Lappies Labuschagne‚ who was invited to a Springbok training group in 2013 under Heyneke Meyer‚ has become one of the more influential members of Joseph’s squad.

“Lappies has been here for three years and played company rugby.

"He played really high-level rugby before his family and his wife decided to make a big-money move‚ which professional rugby players do‚ to Japan‚” explained Joseph.

“The reason I think he made the really fast transition into Japanese rugby is probably his mind: respectful‚ intelligent‚ mentally he’s one of the toughest players I’ve coached and I’ve coached some really good rugby players over the past 20 years.

“Those are the three key qualities that come to my mind. That’s why I promoted him to captain when we needed to get Michael’s rugby right.

“So now we’ve got a double leadership and young and bright [Kazuki] Himeno leadership-wise‚ he doesn’t have the responsibility but he’s playing good footy so the trio complement each other and certainly help the team.”

Joseph explained the players have grasped his ways to the point where he has started feeling redundant.

“The players have really taken over – it’s a really good time as a coach. You know there’s real belief and confidence in the team and what I’m feeling is players have in the last five‚ six weeks grown mentally‚ and with those improvements the confidence is improving.”

The world of rugby is one of order and it is reflected in the dearth of shock results at the Rugby World Cup’s (RWC) quarterfinal stage.
Sport
2 years ago