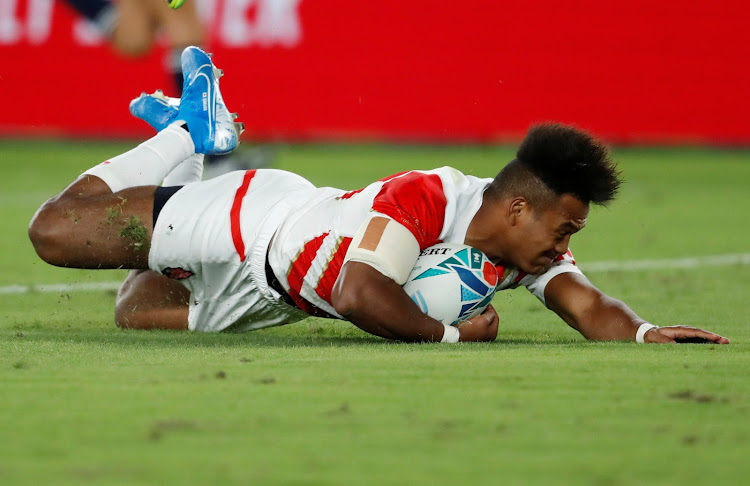 There are a number of South Africans who play for Japan at the Rugby World Cup‚ but none of them have captured the imagination like skilful right wing Kotaro Matsushima.

Unlike tough-as-nails looseforward Pieter “Lappies” Labuschagne‚ who came from Grey College in Bloemfontein and played at all levels of rugby in South Africa before going to Japan‚ Matsushima was a late developer.

Suttie said Matsushima took to rugby like a duck would to water.

“He arrived at Graeme College as an under-13 for his Grade 7 year. His father was doing a postgraduate course at Rhodes University‚” Suttie said.

“I was the Under-13A rugby coach and Matsushima was athletic‚ well built and had pace.

"I thought he’d definitely make an impact on the rugby field and that was the start of his rugby career.

“I started off by playing him at No 8 and he was a game-breaker of note.

"By the end of the season‚ he’d improved so much‚ he received the award for the most outstanding rugby player of the year.”

In his 25 years as an Under-13A rugby coach‚ Suttie would have seen many players come and go.

But the recently-retired teacher‚ whose career spanned 41 years‚ said Matsushima‚ who has a Zimbabwean father and Japanese mother‚ showed a fair bit of promise as a youngster.

What stood out for Suttie was Matsushima’s quick learning and how he adapted to the oval ball game.

“He’d never played rugby before until he got to Graeme College but he was a quick learner. That was the start for him‚” Suttie said.

“He had the athleticism but also had the football background. He had to learn all the rules but he learnt very quickly.

“He was a very good player but in those early stages I didn’t know he’d reach the stars. He showed a fair bit of promise.”

Matsushima came back to South Africa and played for the Sharks at Under-19 and Under-21 level‚ where he had a fair bit of success as a try-scoring machine.

He played a few games for the Sharks at Vodacom Cup level‚ but when he moved back to Japan‚ he made his international debut in 2014.

He has gone on to represent the country more than 30 times and now is a crucial cog of an efficient Japanese team who will face the Springboks in Tokyo on Sunday in the World Cup quarterfinals.

Suttie said the school knew the young Matsushima was only going to be at Graeme College for a year (he continued playing rugby returning as a teenager to Japan)‚ but he’s overjoyed to see him excelling at the highest stage.

“No one wants to miss out on the most outstanding under-13 player but it wasn’t to be for them.

"We knew he was only going to be here for a year. We started him off so we had a small part to play in his progress‚” Suttie said.

“We’ve been blown away by his success and it’s fantastic to see him do well. People took note of him when he scored against the Springboks back in 2015.”

The All Blacks of New Zealand surged into the Rugby World Cup (RWC) semifinals with a display of poise‚ power and precision here on Saturday.
Sport
2 years ago