Springbok Makazole Mapimpi gets all the love on Twitter: 'He is the best' 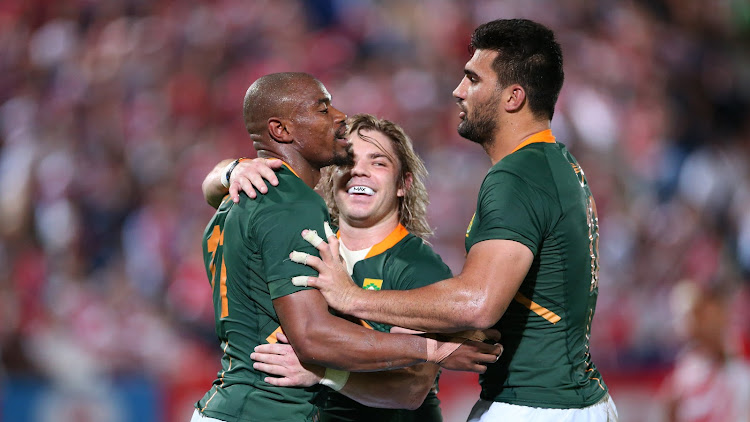 South Africans are raving about the Springboks finishing off their competitors and hosts Japan on Sunday, in a win which has advanced them to the 2019 Rugby World Cup semifinals.

The 26-3 win was a team effort, but winger Makazole Mapimpi's stunning performance is what seems to have grabbed the most attention on social media. The Boks scored three tries, two by Mapimpi  and the other by Faf de Klerk.

Captain Siya Kolisi told SuperSport that Japan challenged them, especially after Tendai “Beast” Mtawarira was shown a yellow card for a dangerous tackle.

“They set the battle throughout the whole week. They told us they were coming for us. It took a lot out of us to keep fighting, but credit to my boys. We fought, especially when we were one man down. That's what we pride ourselves in, hard work and defence.”

The Boks face Wales in Yokohama on Sunday.

Can we take time to appreciate this guy Mapimpi 🙌🏾🔥😭 What a good game he had #JPNvRSA pic.twitter.com/X011OmmaDH

Well done son. You made us proud #Mapimpi

The All Blacks of New Zealand surged into the Rugby World Cup (RWC) semifinals with a display of poise‚ power and precision here on Saturday.
Sport
2 years ago

Duane Vermeulen fires back at the critics: Get off Faf de Klerk’s back!

All Blacks advice to the Springboks: Silence the Japan fans

If New Zealand coach Steve Hansen had any advice for his South African counterpart Rassie Erasmus after the All Blacks hammered Ireland‚ it is not to ...
Sport
2 years ago