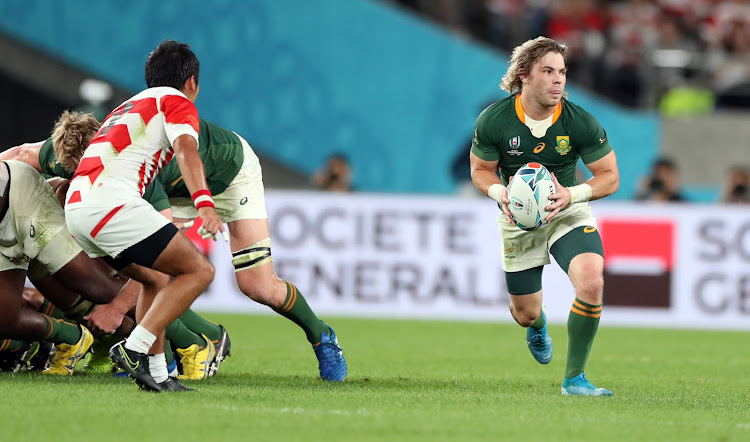 He is no show pony and he is used to the flak. Faf de Klerk takes it all in his short stride.

The memes‚ GIFS‚ the one-liners all poking fun at him and his perceived preoccupation with kicking the Springboks’ hard-earned possession away.

“Players always say they try and block it out and we do try and stay away from it‚ but it is impossible not to see most of the stuff that’s been put out there‚” said De Klerk on Wednesday.

He has adopted a rather mature approach to some of the juvenile buffoonery on social media.

“Some things are really funny and I enjoy some of the things that people have come up with‚" De Klerk said.

"But also some guys get a bit personal. It is not because they want to get personal‚ people just love the Springboks and they are very invested in the team.

"It is not because they are negative‚ it is because they are very invested. We appreciate that as players knowing we have great support. When we win they are happy that we got the job done. We know in the camp what works for us and what doesn’t.” He doesn’t have Herschel Jantjies’ predatory instincts in tight spaces or the speed and individualism of Cobus Reinach but De Klerk has developed into one of the vital cogs in the Bok set-up. He taps into and partially dictates the team’s rhythm and tempo. He is at its heartbeat.

He explained what makes him kick.

"Last weekend we did kick a lot and Japan managed to contain our aerial battle. If you look further‚ however‚ we did get some territorial gain.

"I think it was a very positive outcome when we kicked. We gave them possession but they rarely managed to do anything to with it.

"It is going to be a different challenge this week. I don’t think we are going to have the same threats. It is about seeing the space and I feel our wings have come so far these last two years.

"They are competing well in the air.

“We don’t go out with a set plan of me just kicking. We read the game and I listen a lot to what Handre (Pollard) is telling me.”

He has also become an unlikely but valuable asset in defence.

“It might look like it is a bit role-les‚” said De Klerk about the places he pops up in in defence.

“I do play a role. It is not just willy-nilly. I’m not just running around. I need to fill certain spaces.

“As nines in our system we must make sure we come off the line and make sure our numbers are correct on both sides. Maybe create a turnover and that is the great thing about the team everybody is up for it.”

Since he left the Lions in 2016‚ De Klerk has become a more all round player at Sale Sharks in England.

“I was put in a role where I needed to make a difference in the team‚" he said.

"The responsibility came my way. It involved how we want to play‚ how we kick and kicking for poles and doing kick-offs.

“It helped me a lot to get me to where we are now. I played a lot because the head coach backed me. I’m playing with a lot less pressure.”