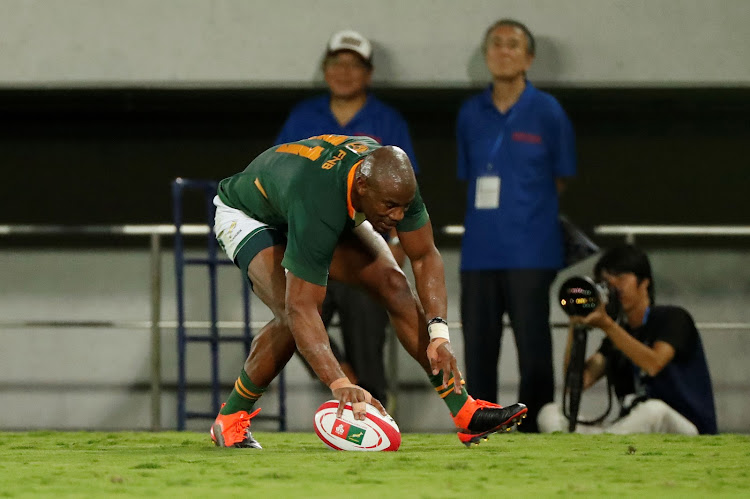 Makazole Mapimpi runs in a try at the Kumagaya Rugby Stadium in Kumagaya, Japan, during this year's Rugby World Cup.
Image: REUTERS/Issei Kato

In fact, SA’s two wins were achieved in tryless finals. Here are five memorable moments when defences had to yield.

Ace All Blacks flank Jones scored the first of three tries in the inaugural final. It wasn’t the most spectacular try, but it was significant.

The All Blacks nicked a line-out a few metres from the France try line, before David Kirk passed to Grant Fox, who opted for the snap drop. It was an awful attempt that bobbled past the face of the uprights, but the ball proved difficult to bring under control.

French wing Patrice Lagisquet, also known as the Bayonne Express, made a halfhearted attempt at gathering the ball. Alan Whetton couldn’t gather it either, but Jones picked it up, then twisted around to beat a defender, before crashing over to score. New Zealand ran out 29-9 victors.

Australia took control of a tightly-contested final when loosehead prop Tony Daly crashed over after a line-out five metres out from the England try line. Willie Ofahenguae grabbed Phil Kearns’ feed, Daly peeled around with fellow prop and future Wallabies coach Ewan McKenzie and, in concert, barged over the try line.

Initially McKenzie was credited with the try, but the record books now show Daly was the man who scored the only try in a 12-6 win for Australia.

Australia had the upper hand in this final against France by the time hooker Jeremy Paul ran on to the field. His first action was a line-out feed, which John Eales rose to effortlessly, before offloading to George Gregan.

The scrumhalf headed infield, but in an orchestrated move flipped the ball backwards, where another substitute, Owen Finegan, diagonally ran on to the pass. It bamboozled the French defence and once Finegan got past the first defender he just kept going. Though the French defence caught up with him, Finegan’s momentum got him there.

England scrumhalf Matt Dawson opted left from a ruck and found No 8 Lawrence Dallaglio on an enthusiastic diagonal run in the final against the Wallabies.

Once he was caught, he offloaded in the nick of time back inside to Jonny Wilkinson, who in turn floated a perfect pass to the outside, where Robinson ran on to the ball at speed and headed for the corner for a telling try. Wilkinson’s drop later helped earn England a 20-17 win.

France may well have had an unlikely RWC win had it not been for their negligence at the line-out of an unexpectedly tight final. Keven Mealamu’s line-out throw was collected by Jerome Kaino, who quickly popped the ball back towards touch, where Woodcock ran on to the pass at speed into a gap as wide as the Red Sea. To huge home-crowd relief, New Zealand won 8-7.

Stay up to date with all the latest Rugby World Cup 2019 final news.
Sport
2 years ago

England too have stuck to their guns and have named an unchanged squad for Saturday’s Rugby World Cup final against South Africa in Yokohama.
Sport
2 years ago

WATCH | The men behind the isiXhosa Rugby World Cup commentary