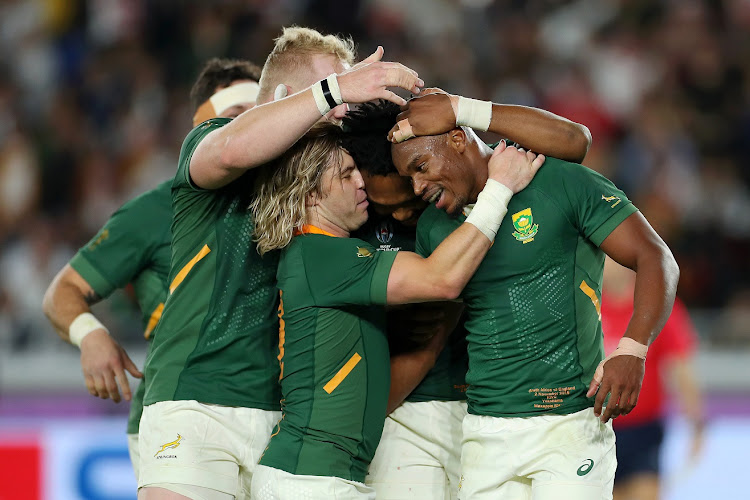 The Springboks are on top of the world again!

They surged to a third Rugby World Cup title beating England convincingly 32-12 in the final here on Saturday.

Coach Rassie Erasmus’s masterplan marvellously came to fruition as his team, with cool composure, stuck to a script they had so religiously followed all tournament. Their forwards pummelled England in particular in the scrums, while the Springboks’ belligerence in defence allowed England very little time and space.

The Boks pulled Red Rose petals until there was nothing left to pluck.

The win is testament to coach Erasmus’s strategic planning and powers of organisation. He initiated a turnaround strategy for the national team that was in the doldrums after he became SA Rugby’s director of rugby almost two years ago.

Captain Siya Kolisi should take a bow too. His journey to becoming a World cup-winning captain is the stuff of legend, while Handre Pollard showed nerves of steel throughout.

Pollard, who went into the semifinals with an unsatisfactory 63 percent return from the kicking tee, turned it around splendidly against Wales and he continued that form despite missing his first attempt in the final. He converted eight of his 10 attempts at goal.

Although the Boks came into the match an assured and settled unit England were installed as firm favourites with the bookmakers and indeed their press. The Boks, on the back of a resurgent scrum and a belligerent defence, knocked Eddie Jones’s team out of their stride.

England, who produced a marvellous performance in the semifinal to beat the All Blacks, were always trying to play catch-up.

They had been the team among the top-tier nations that vacate the blocks quickest but here they had to play catch-up throughout.

Initially it was a tight, nerve-jangling contest that was dominated by penalties but the Boks grabbed the initiative thanks largely to England’s high error rate. Springbok flyhalf Pollard, with six penalties, had helped establish a buffer before the issue was put beyond doubt when left wing Makazole Mapimpi became the first Springbok try-scorer in World Cup final when he dotted down in the 67th minute.

Cheslin Kolbe put the icing on the cake when he scored the Springboks’ second try in the 74th minute.

England may have a budget a gazillion times that of SA Rugby but it was the Boks, fully worth their weight in gold, who were in the pound seats almost throughout the match.

It was they who bossed the most crucial collisions, although it came at a price. The Boks lost Bongi Mbonambi and Lood de Jager in one move in the first half. Thankfully they have a bench that’s split six/two.

England suffered an early setback when dynamic tighthead prop Kyle Sinckler had the misfortune of being knocked out by his teammate, Maro Itoje. Both were in the act of tackling Mapimpi when Sinckler suffered the blow to the head.

Dan Coles replaced him but he was shoved into reverse gear by Tendai Mtawarira who dominated the England tighthead for the remainder of the first half.

When Mtawarira and Frans Malherbe were substituted in the 44th minute one got the sense they could have continued for another 10 minutes at least.

Their replacements, Steven Kitshoff and Vincent Koch, immediately went into a scrum and helped deliver another penalty. The script remained the same and Pollard kept edging the Springboks to World Cup glory. By the final whistle it all seemed too easy.

Through Handre Pollard's four penalties, South Africa took a 12-6 lead against England in the Rugby World Cup final in Yokohama.
Sport
2 years ago

On the morning when Springbok captain Siya Kolisi readied to lead his team onto the field in Tokyo, a world away in the Eastern Cape township of ...
Sport
2 years ago