Gees rubs off on Springbok physio 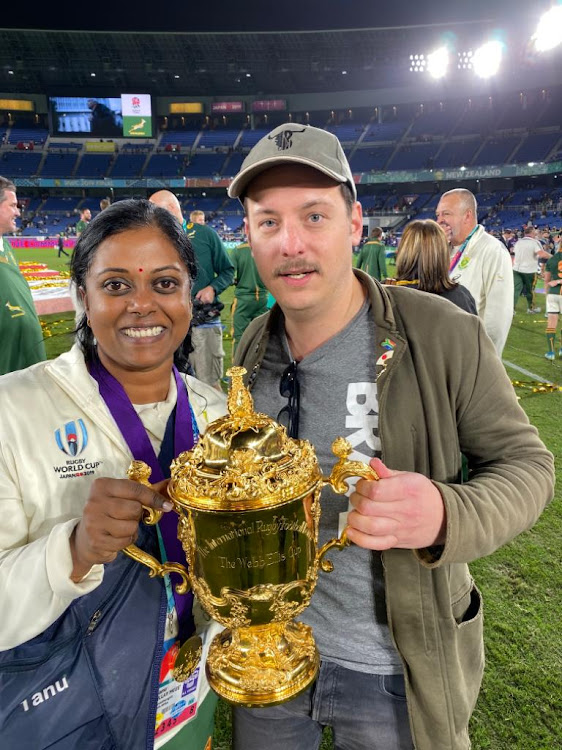 Tanushree Pillay is one of three physiotherapists who are part of the Springboks team. Here she is pictured with her husband Giles Mege.
Image: supplied

Sundru Pillay was among the families of the Springboks at the quarter and semifinals of the Rugby World Cup in Japan as they swapped stories of ferrying their young sons to rugby practice and being at every school game to support them.

Pillay didn’t have similar stories to tell but he is also a proud father of a member of the Bok set-up.

His daughter, Dr Tanushree Pillay, plays an important behind-the-scenes role and was part of the celebration when captain Siya Kolisi held the trophy up high at Yokohama Stadium on Saturday.

She is one of three physiotherapists who are part of the Springboks team. The other two are Vivian Verwant and Rene Naylor.

Pillay told TimesLIVE that his 39-year-old daughter always wanted to be a physiotherapist.

“She left home at 17 and never came back to Durban, where we lived. She did all her degrees at the University of Western Cape on full scholarship.

“She found her place in sport many years ago, not only rugby but in athletics. She has been working in many different fields. She came with a lot of experience which is why SA Rugby looked to her. Academically, she had a phenomenal career. I think she has found her niche in life,” he said.

Sherwood primarySchool learners and staff, the management of the school, the governing body would like to congratulate...

Tanushree was also part of the Rugby World Cup team in 2015.

“My wife Rani and I have followed her all over the world,” Pillay said.

However, it is this year's World Cup that will always be memorable for Pillay, even though he was unable to attend the final as he had to fly back home before the match due to family reasons.

“I met a lot of my mates from Durban there. The Japanese people have made this World Cup unbelievably exciting. The excitement is electrifying. All the Japanese know the SA anthem. They are wearing the colours. They even know about a braai and boerewors. I haven't stopped smiling since I got back home,” he said.

Pillay and his wife watched the final with their neighbours.

His first call after the final whistle was blown was to Tanushree.

“We are overjoyed,” he said.

Cyril Ramaphosa on Springboks' win: This is a historic moment for SA