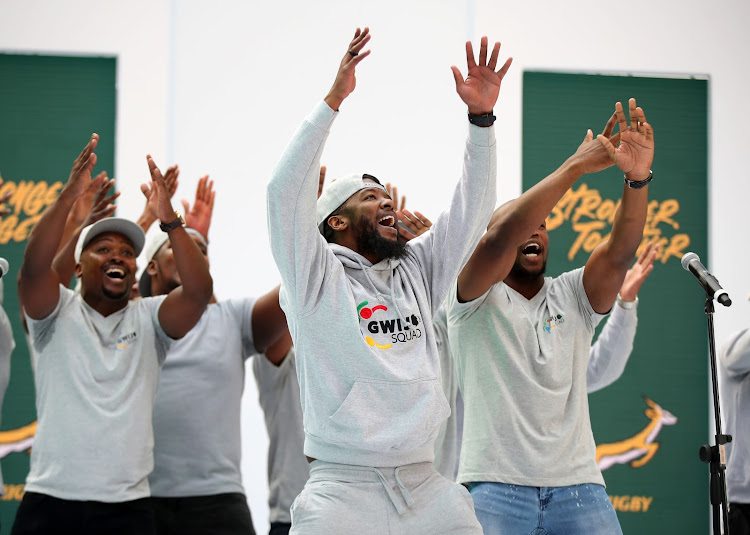 Captain Siya Kolisi may not have been able to hear them when he ran onto the field with his teammates in Tokyo on Saturday‚ but the rousing singing of the Gwijo Squad back in SA was no doubt reverberating in his heart.

Founded by Johannesburg financial advisor Mzwandile Riba‚ the size of the group varies between 200 and 2‚500‚ depending on the match.

It started off as a small group of friends going to enjoy the rugby together in 2017.

Riba said Gwijo was a word that described the folk singing used to bring groups of people together.

“They are songs of encouragement‚" Riba said.

"We started singing in 2017‚ coincidentally it was the first test match which saw Kolisi as captain [of the Stormers team]. After that we organised to meet again at the next match.

“We are a big group and we all contribute to busses to take us to matches. Those who can afford a bit more help pay for those who can't.

"We now use the extra money we have to subsidise people from the surrounding communities so they can enjoy live matches too."

THIS. MOMENT. WAS. MAGICAL!

After the match, Siya Kolisi and some of Boks, came to support us and while there we figured that he was requesting a particular gwijo. 😉🙌🏽

So we gave him what he wanted! 🤗 #GwijoAtTheRugby

On Saturday‚ the group sang at the Sandton Convention Centre‚ where hundreds gathered to watch the game.

“Sport is unifying and a big part of what the squad does is give back to the community‚" Riba said.

"We now help sponsor trips to different sporting events. And we may just be the next group to challenge the Barmy Army [an English group of touring cricket fans] at the Proteas [cricket] games.”

The Gwijo Squad is now a popular attraction at stadiums‚ and Riba said if Kolisi was playing he always took time out to take photos with the members as they sang songs from his childhood.

He said that while they had not been able to get to Tokyo this year‚ they were happy to help pull a big crowd of local supporters to support from home.

"The squad is organised by 13 people who have played rugby at school or varsity level‚" Riba said.

"We organise events where people can buy tickets to go to a game or a screening‚ so it is formalised. When stadium games are organised the squad block books tickets near the tunnels central to the field.

“We have a big repertoire of about 20 songs from our childhood. The backing vocals are easy to catch onto‚ so when we sing people can join in easily.

"Everybody joins in regardless of race or background. Sometimes we sing along to other songs. At the last match Sweet Caroline played so we just sang along.

“These songs have been sung at our schools and universities so they always existed‚ but the game of rugby really formalised the singing. It unites all South Africans.”

They make a habit of singing outside the hotel where the Boks are staying before the game.

“At the last game in Pretoria‚ when we sang outside the hotel‚ Kolisi and a few other members of the team came out and joined us.”

Making music of another kind‚ Johannesburg rock group Rugga Rock are so enamoured with rugby they have created a whole genre of rock songs.

Frontman Van der Watt said the group was tired of the rock subjects of love and loss and wanted to remember a time when they felt most alive.

“We are from those old school rugby obsessed days of 1995 when we would lose track of the time and just have fun playing the game‚" Van der Watt said.

“The whole band is rugby obsessed‚ there is so much subject matter in the sport. We are inventing characters to populate the Rugga Rock world - like Rugzille - a giant rugby lizard.”

The band infuses rugby orientated lyrics with rock and roll because‚ according to Van der Watt‚ rock music has a similar energy to rugby.

They have two singles they are most proud of‚ Bring hom Terug and Ons Beker.

The former is a song about the past World Cup wins and the latter is a song they wrote about this year's World Cup.

“We love performing and both singles are already out - we hope they do well - we were so lucky [the Springboks] made it to the final‚ but I’m sure people would like the songs nonetheless. We may even do an acoustic version of Ons Beker.”

Another Bok fanatic‚ Walter Ketteringham from Cape Town‚ dropped more than R8‚000 for a last-minute ticket to Saturday's final.

But this year his love for the game has cost him over R50‚000 in total. He watched 13 matches at the event‚ including all the SA matches.

He was due to fly home on October 28 but the software developer had to call in for some extra leave after the Boks made it to the final.

“I’ve been with mates from SA and from Ireland… We come to every World Cup to experience the atmosphere‚ it’s a great way to [explore] a country‚ we like to watch the Soccer World Cup too‚" he said.

“I was booked to leave [with my friends] but when we won I just had to stay. I didn't have a ticket for the game though.

"Everything is very expensive‚ I was prepared to spend up to R10‚000 on a ticket for the finals - but just extending my stay at the hotel was very [costly].

"Everything went up six times the face value since the last game.”

Back at home‚ hawker Promise Mbukhwe is also a big fan of the Rugby World Cup - but mostly because he is making good money off it selling flags on street corners.

He is one of many street sellers to discover that rugby fans will do almost anything to show they love the game - even if it means spending R250 on a flag that should cost R50.

His trolley is usually laden with straw brooms and mats made by hand at his home in Zakariyya Park‚ but during the Rugby World Cup season he took advantage of the Bok frenzy.

Now that the tournament is over‚ he will go back to weaving until the next major tournament means he can sell more merchandise.

They produced an incredible display in the Rugby World Cup 2019 final and raised the hopes of a nation. The @Springboks are your World Rugby Team of the Year! #WorldRugbyAwards pic.twitter.com/FmjoGyCUkw

But there are far more glamorous ways of showing support for SA's rugby heroes than singing and flags - just ask Johannesburg business development adviser Kirsten Teasdale‚ who donned an eye-catching SA flag ballgown to the semifinals against Wales.

Teasdale was photographed in the crowd and featured in many overseas publications.

“I was wildly stunned at the kind of recognition that it got‚ and seeing it in newspaper articles has been a massive surprise‚” she said after arriving back home on Wednesday.

The dress took her more than 20 hours to make and has travelled to three consecutive Rugby World Cups.

“I am a lifelong Springbok fan‚ and my husband and I have been to every world cup since 1995.

"In 2011‚ I decided that because there are so many fans that make such a big effort to support our team that I should do the same‚” she said.

The dress made its first appearance at the 2011 quarterfinal clash between the Springboks and Australia in Wellington.

Through Handre Pollard's four penalties, South Africa took a 12-6 lead against England in the Rugby World Cup final in Yokohama.
Sport
1 year ago