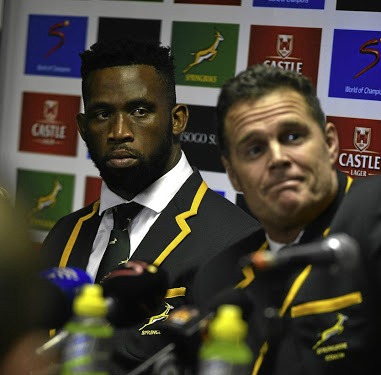 Erasmus conceded that selecting Kolisi for the tournament was a gamble as he did not play in the Boks' successful run in the Rugby Championship a few months ago.

Kolisi's appearances were limited and he only played one Currie Cup match for Western Province‚ in the farewell Test against Argentina at Loftus and in a friendly game against World Cup hosts Japan at Kumagaya.

“Our motto was not to make the same mistakes that we did in previous World Cups where I was involved‚" he said.

"We had experienced teams on paper but not fully fit teams‚ and we decided that when we got into that plane to Japan that everybody must be fit‚” Erasmus said.

“I must tell you that out of the seven to eight weeks of preparations‚ out of the probably 40 training sessions that we had‚ there were about three players who sat out with niggling injuries.

"Siya was one of those who sat out and he was the only player we had to manage.

“A guy like Damian Willemse lost out because he wasn’t fully fit when we went over there.

"A guy like Lizo Gqoboka had an injury just before the World Cup and there were a few guys like the Du Preez brothers who also lost out.

The Springboks touched down in SA on Tuesday November 5 2019 after their 32-12 win over England in the Rugby World Cup final in Yokohama, Japan. The squad arrived at Johannesburg's OR Tambo International Airport, where thousands of South Africans were waiting for them - proving once again that the country will always back our boys.

"We decided that we would rather take a fully fit team and the only guy we took a chance on was Siya‚ and we had to manage him so that he could play.”

Erasmus said they had to come up with creative plans to manage Kolisi so that he regained fitness.

“He had one Currie Cup game‚ he also had a game against Argentina and then another friendly against Japan‚" he said.

"It was important to get him fit because he is a great rugby player and secondly he is our captain.

"I thought his form was not great the first two games and that is why he played three matches in a row and we always subbed in the last fifteen to ten minutes of the first two to three games until he was fully fit.

“In the last three games his form was outstanding‚ so much so that we had to sub him because he emptied his tank in the closing stages of the last matches.

"It was important to have him fit and I want to say a massive thank you to the medical team who got him through that process but it was a real worry for me earlier in the year.”.