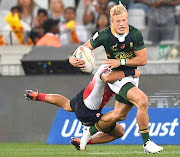 Despite running in seven converted tries against Japan, opening day hero JC Pretorius pointed to the Blitzboks’ defence as the key ingredient to their World Sevens Series win on Friday.

Japan simply had no answer to the Blitzboks’ speed and power and yielded to the side who won the opening event in the series in Dubai last weekend.

The Blitzboks will play Fiji and the United States on Saturday as they go in pursuit of a second consecutive title, their first on SA soil.

“We did well in sticking to our structures, which made our defence very strong, and because of that, we could manipulate them and scored tries,” said Pretorius.

Pretorius was one of the standout performers and scored a stunning long-range try against Japan.

“It is my first tournament [here in Cape Town] and my first try, so that is a very nice feeling. It was a dream of mine playing at this tournament and now it has happened, so I am really pleased,” he said.

He was quite taken by the atmosphere in the stadium, which is likely to be ramped up on the weekend. “I asked the guys about it and although they explained, it was still amazing to hear the support from the crowd. We really appreciate that and playing in front of supporters like these is special.”

The Blitzboks take on Fiji at 1.51pm and the United States at 8.03pm in their remaining Pool A games on Saturday. Fiji beat the USA 28-14 in their match earlier on Friday.

The Blitzboks and Fiji have clashed 88 times with the island nation winning 51. In their 54 clashes against the USA the Blitzboks have won 46.

Springbok Sevens captain Siviwe Soyizwapi said they need to recharge and reset for the more taxing encounters on Saturday. “We need to reload and start over again,” said Soyizwapi.

“It is going to be a tough day taking on two classy teams like that, but every day of a tournament on the World Series is a tough one.”