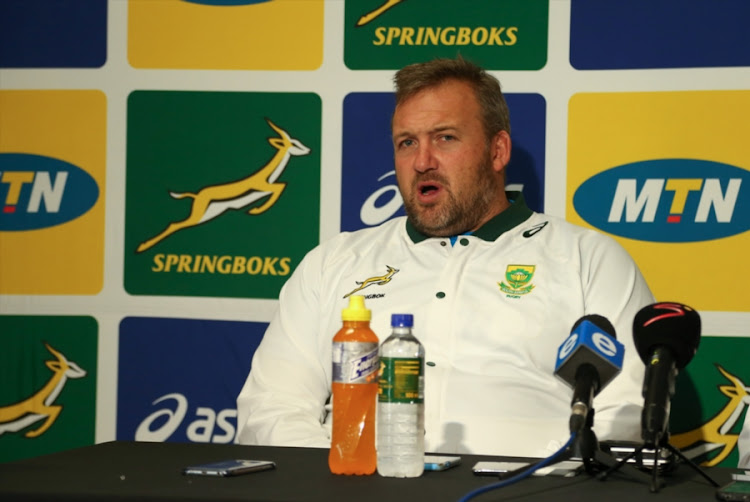 Forwards coach Matthew Proudfoot is back in the Springboks coaching set up.
Image: Petri Oeschger/Gallo Images

Another piece of the Springbok coaching puzzle appears to have fallen into place with the announcement that former Bok prop Daan Human will be the new national team scrum coach.

Although his role will focus on the scrums‚ Human will effectively replace Matthew Proudfoot whose contract with SA Rugby expired last year.

Proudfoot has joined Eddie Jones in the England coaching set-up.

Human‚ a redoubtable Western Province loosehead prop who played in four Tests under Rudolf Straeuli in 2002‚ had a distinguished career with French giants Toulouse before returning to the country to farm and coach.

He played eight years for the French team and retired as a player in 2012 having featured in 169 games for the club.

Human is likely to take up a consulting position with the Boks which will allow him to continue as scrum coach at the Bulls.

The Cheetahs effectively announced Human’s appointment by congratulating him in a press release on Tuesday.

Human is set to join the Bok coaching unit most likely to be headed by Jacques Nienaber after Rassie Erasmus opted to focus on his job as SA Rugby’s director of rugby.

Erasmus‚ the Rugby World Cup-winning coach will‚ however‚ still oversee all matters pertaining to the team and his influence may still extend to dictating the Bok playbook.

Deon Davids is heavily tipped to take up the position of assistant coach‚ while Mzwandile Stick and Irishman Felix Jones are also set to take up positions on the coaching staff.

Bulls coach Pote Human will implore his team to deliver full 80-minute performances once Super Rugby gets underway at the end of the month.
Sport
2 years ago

Lukhanyo Am has been handed the honour of captaining the Sharks for the 2020 Super Rugby season.
Sport
2 years ago

Lions turn to wrestling techniques ahead of Super Rugby

As a team in transition the Lions have much with which to come to grips.
Sport
2 years ago