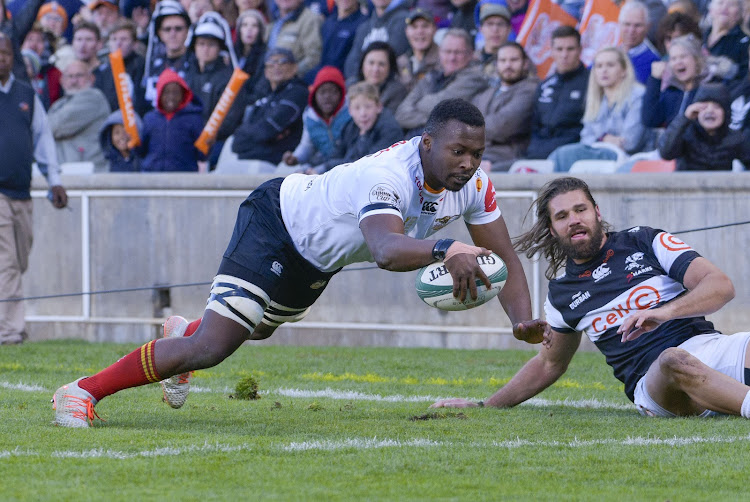 Junior Pokomela of Toyota Cheetahs scoring a try during a Currie Cup semifinal match against the Sharks in Bloemfontein in August 2019. Polomela will stay with the Bloemfontein until the end of October 2022.
Image: Frikkie Kapp/BackpagePix

Covid-19 may be tightening its grip on the sporting purse strings but the Cheetahs have extended six players’ contracts.

Former SA Under-20 vice captain Junior Pokomela has had his contract extended until 31 October 2022‚ along with fellow flanker Aidon Davis.

Props Aranos Coetzee and Charles Marais have also been contracted until that date.

American scrum half‚ Ruben de Haas’s contract will terminate at the end of October next year.

Prop Coetzee represented Namibia in two Rugby World Cups and is the recipient of the Cheetahs’ Super Rugby player of the year award in 2017.

His contract extension along with that of Marais will bring continuity to the Cheetahs’ front row.

Davis‚ is a former SA Schools and Junior Springbok loose forward‚ returned to South Africa following a stint in France‚ where he played for Toulon and Bayonne.

Davis represented the Cheetahs in several Guinness Pro14 matches last season‚ but his season ended abruptly when he sustained a bad leg fracture in training session.

Pokomela who made his Super Rugby and Currie Cup debut in 2017 is also on SA Rugby’s pay roll.

His dad Pieter‚ and grandfather‚ Gerard‚ both represented the Free State at provincial level.

Although he was born in George‚ De Haas‚ grew up in Arkansas. He represented USA at the 2019 Rugby World Cup in Japan.

The Cheetahs too are in limbo following the suspension of Pro14.

They won six of their 13 matches this season and are placed fourth in Conference A of the points table.

Covid-19 has rugby fighting for its survival. The warnings are stark.
Sport
2 years ago