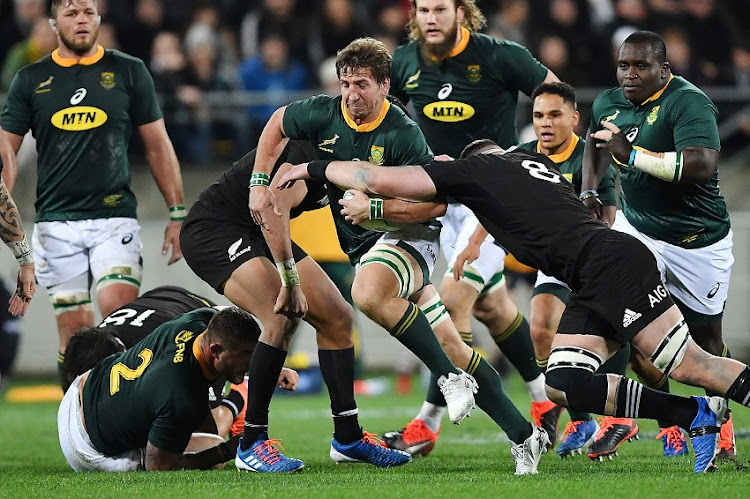 Kwagga Smith of the Springboks is tackled by Kieran Read of the All Blacks during the 2019 Rugby Championship Test Match between New Zealand and South Africa at Westpac Stadium on July 27, 2019 in Wellington, New Zealand.
Image: Mark Tantrum/Getty Images

The Springbok internationals that were due to take place in July have fallen victim to the novel coronavirus-enforced travel restrictions.

The three Tests against Scotland (two in Cape Town and Durban) and Georgia (one in Port Elizabeth) were set to take place on July 4‚ 11 and 18 respectively.

Those Tests have now been postponed as governing body World Rugby has postponed the rugby Tests that were going to take place across the world because of ongoing government and health agency Covid-19 directives.

World Rugby cited extended travel and quarantine restrictions that apply to numerous countries and concerns over adequate player preparation time as the main reason for the postponement of the July Test.

The postponement of the Newlands Test on July 4 may also throw into doubt the future of Newlands as a rugby hosting venue as the Test was set to be the final one at the storied venue.

Domestic and intercontinental rugby ground to a sudden halt in early March because of Covid-19 concerns‚ even though New Zealand’s Super Rugby franchises are set to return to action next month in a New Zealand-only tournament.

The postponement doesn’t affect South Africa only as New Zealand’s three Tests against Wales and Scotland are affected. Australia’s engagements with Ireland and Fiji and Argentina’s dates with France and Italy are also affected.

SA Rugby’s chief executive officer Jurie Roux said their hands were tied as any rugby-based solution needed the health and safety of the players to be prioritised.

“Any solution will have player health‚ welfare and appropriate return-to-play protocols at heart‚” Roux said.