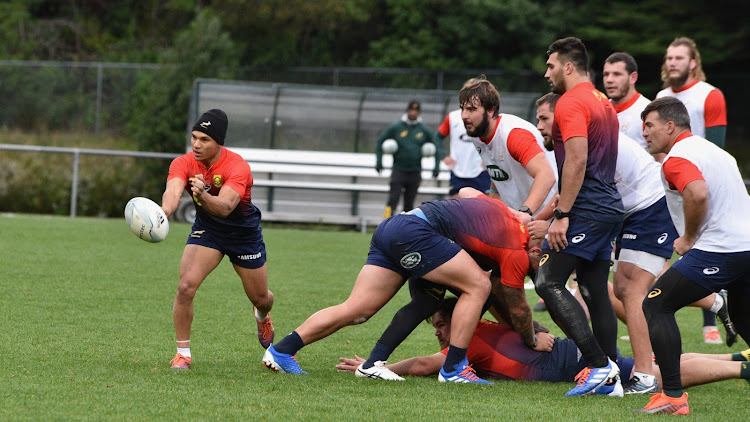 Herschel Jantjies and his Springboks teammates during a training session in Wellington.
Image: Springboks/Twitter

“Rugby submitted their plans and they are being evaluated‚” Mkhize said on Monday at a press conference where sports minister Nathi Mthethwa announced a second wave of relief funding for athletes and artists who have been affected by the outbreak of Covid-19.

“As soon as we are done we will communicate with them. In terms of resumption of training‚ initially we said they are allowed to go back to training subject to compliance.

"The minister (Mthethwa) spoke about directions that are going to be published this week which will be dealing with the whole approach regarding contact sport.

“We have their plans and it is not necessarily negotiations we have entered into with them‚ but it’s about compliance. We are engaging with them based on the plans that have been submitted. We are working with them on containment of the virus when they return to playing.”

Netball‚ on the other hand‚ appears to be a step behind as they are yet to submit a plan for return to play.

The netball players continue to train individually at home and Mkhize said they will not be returning to court as yet.

“They have not yet submitted the plans in terms of them resuming play at this stage. But we are hoping that they will be guided by their own conscious decision and bench-making‚ and whether they believe they are ready to resume play or not‚" he said.

"I must emphasise that from the very regulations that were issued towards the end of July‚ the main essence was that contact sport is allowed to do controlled training.”

The initial plan for netball was to return to team training and start playing competitive matches at level two of the national lockdown.