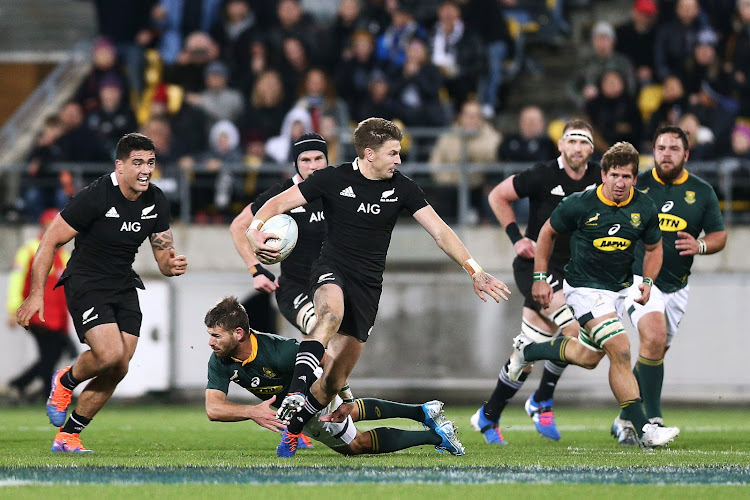 World champions New Zealand and South Africa do battle again in the Rugby Championship to be hosted in Australia.
Image: All Blacks/Twitter

The head of the New Zealand players' union said on Monday he would be surprised if any player had already decided to withdraw from the All Blacks' Rugby Championship squad due to concerns about travelling during the Covid-19 pandemic.

The All Blacks will spend at least eight weeks in Australia for the Nov. 7-Dec. 12 southern hemisphere tournament against the Wallabies, Springboks and Pumas and will then have to go through two weeks of isolation upon their return.

New Zealand Rugby (NZR) had said on Friday they would support any player who decides to opt out for family reasons and local media reported on Monday that several had indicated they might not want to spend that much time away.

However, Rob Nichol, the head of the New Zealand Rugby Players Association, said the players were unlikely to make a decision until they had been fully appraised of the plans.

"I'd be very surprised if any player has made a decision as yet, because they know we've got a fair bit of work to do on the details before they know what it involves," he told Stuff Media on Monday.

"Once we've got the full plan, that's the point when players will look at it and then take it under consideration.

"They'll be given a reasonable amount of time to mull over it and talk it through to those close to them."

Nichol was unavailable for comment when contacted by Reuters.

NZR said reports that players had expressed a desire to withdraw were premature.

The All Blacks are scheduled to play the Wallabies in Bledisloe Cup matches in New Zealand next month before heading to Australia for the Rugby Championship.

Greenhorn Boks for mission Down Under

An inexperienced Springbok team will travel to the Rugby Championship with Lukhanyo Am likely to captain the side in Australia.
Sport
7 months ago

All Blacks players could opt out of Championship

All Blacks players who are not keen on spending eight weeks away from family around this year's Rugby Championship would be supported by New Zealand ...
Sport
7 months ago

Bok player Cheslin Kolbe is every inch a hero

Rugby World Cup hero Cheslin Kolbe says sport helped him escape the gangs and drug addiction that were so prevalent on the streets of his youth.
Sport
7 months ago
Next Article