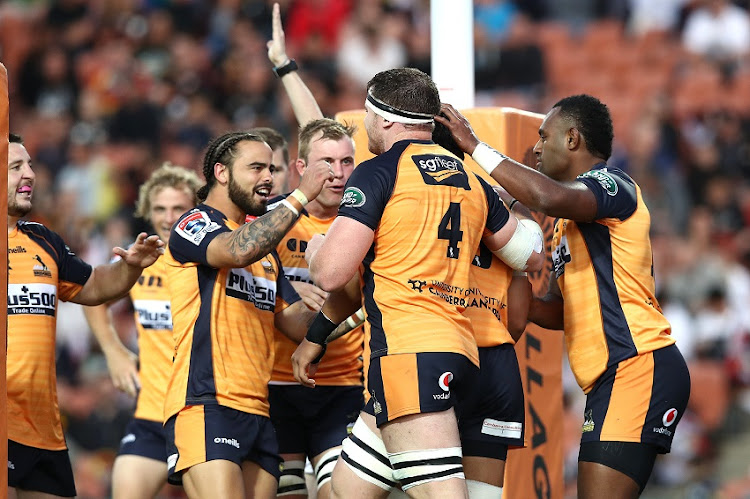 The Brumbies celebrate the try to Pete Samu during the round four Super Rugby match between the Chiefs and the Brumbies at FMG Stadium on February 22, 2020 in Hamilton, New Zealand.
Image: Phil Walter/Getty Images

The ACT Brumbies confirmed their domestic superiority in Australian rugby with a 28-23 victory over the Queensland Reds to clinch the Super Rugby AU title in Canberra on Saturday.

The victory ensured the Brumbies' third title at Super Rugby level, having won the broader international Super Rugby competition in 2001 and 2004.

Hooker Folau Fainga'a, winger Andy Muirhead and fullback Tom Banks all crossed for the home side, while flyhalf Noah Lolesio, surprisingly brought back after two months out with a hamstring injury, kicked 13 points. Loose forward Harry Wilson and lock Angus Blyth scored tries for the Reds and James O'Connor added 13 points from the boot to give them hopes of adding to their only Super Rugby title in 2011.

"It was a huge effort from the boys," Brumbies captain Allan Alaalatoa said. "We always knew the Reds were going to come back in the second half.

"We did really well to close out that game."

The Brumbies played to their traditional strength, turning around the Reds with tactical kicking, superb ball retention and putting pressure on them in their own half.

They also took advantage of some poor discipline to establish a 15-3 lead with tries to Fainga'a and Muirhead.

The Reds dragged themselves back into the game with their scrum dominance before Jordan Petaia set up number eight Wilson for their first try, which O'Connor converted.

He then added a penalty on the stroke of halftime to pull the score back to 15-13.

The Reds, however, suffered a triple blow in the first 10 minutes of the second half.

First, Petaia was unable to return following the break due to a leg injury, and then lock Lukhan Salakaia-Loto failed a head injury assessment. Reds winger Filipo Daugunu was then given a yellow card for a dangerous tackle straight after Banks's try.

Lolesio added a dropgoal and penalty to give his team a 28-13 lead before O'Connor added his third penalty and then Blyth crossed to drag the Reds back to 28-23.

But they were not able to keep their momentum going.

"Congrats to the Brumbies, they were class the whole season and they showed that again tonight," Reds captain Liam Wright said. (Reporting by Greg Stutchbury in Wellington; Editing by Hugh Lawson)