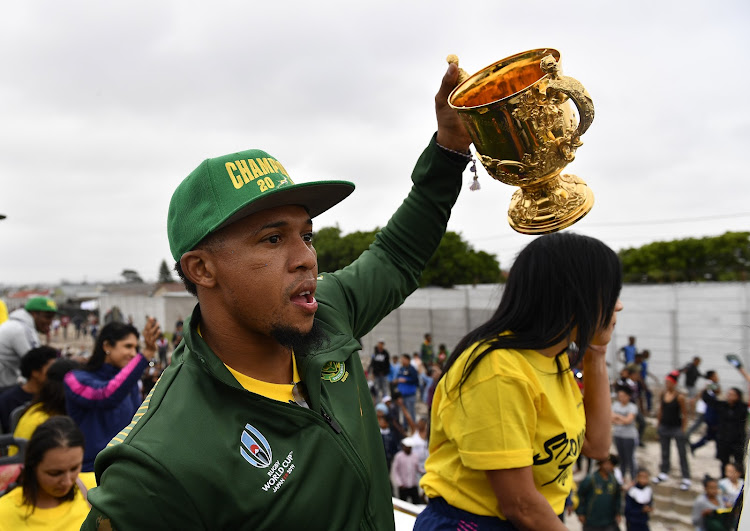 SA Rugby director of rugby Rassie Erasmus may have had cause for concern when Handrè Pollard was claimed by injury‚ but with Elton Jantjies fully fit and firing‚ he has no reason to worry.

Jantjies‚ who debuted in 2012 with 37 Tests under his belt‚ has long completed his scholarship and while he has to play second fiddle to Pollard‚ Erasmus is at peace knowing that there’s a world-class Jantjies and more than capable reserves in Curwin Bosch and Damian Willemse.

“However‚ I can’t think of a better team man than Elton Jantjies and he stood out at the Rugby World Cup.

"The way he helped us to win the Rugby World Cup despite playing in only three games with the six/two split was immense.

“I have lots of faith in Elton and when he played with structure and with a good pack of forwards‚ he’s unbelievable.

"In my opinion‚ Elton would be the immediate first choice‚ just on his potential and proven performance‚” Erasmus said.

“There were times before the World Cup were Elton was pushing really hard for Handre’s spot‚ but Handre ended up being the number one and did well.

“There’s also Curwin Bosch‚ which is why I’m so excited for the rugby to be played‚ especially with the long tournaments where coaches and players will be tested.”

SuperFan Saturday was deemed to be an excellent outing for the four Super Rugby franchises‚ however‚ there were a few injuries that’ll affect Saturday’s Springbok Showdown at Newlands.

The Stormers’ chunky Springbok tight-head prop Frans Malherbe is injured‚ with Carlu Sadie from the Lions stepping in the Gold team while Mnombo Zwelendaba coming in for Seabelo Senatla in the Green team.

Kurt-Lee Arendse was initially called up as a replacement for Senatla‚ but missed his flight to Cape Town.

Springbok coach Jacques Nienaber was not impressed by the quality of the rugby‚ but by how the teams have adapted to how the ruck laws have to be strictly applied by match officials.

“I thought it was a really good outing if I compare it with how the other Super Rugby tournaments started. There was good continuity and the set-pieces were good. If you look at how the breakdown was officiated‚ we had a whole 10 weeks to look at mistakes being made there from players‚ coaches and referees‚” Nienaber said.

“We have a meeting with the referees once a week where we want to get a good product out there while learning from other countries.

"There were times in one game where 20 phases were crossed‚ while in other countries‚ they struggled to get past four or five phases without getting penalised. I was very impressed and it was a fairly decent outing.”

Saturday’s game was one of at least five or six that Erasmus said that the players needed to get into shape for elite rugby‚ presenting a potentially tricky period for Erasmus and his think-tank to get players ready.

“We have to get five to six games into the players before it is safe for them‚ to avoid injury risks‚ player welfare and living in a bubble.

"They’ll be moving around‚ which they’ve started‚ then they’ll be gone for eight weeks and then when they come back‚ they’ll have to be quarantined.

"We’re currently investigating those things to see how we can best make the Rugby Championships work.

“The players with the 400-plus minutes that we need to be competitive‚ safe and are able to play in a high performance environment are the overseas-based players.

"Only one of the guys there has more than that‚ but there’s at least two weeks to go‚ so the target could be hit‚” Erasmus said.

Despite its protracted hiatus rugby emerged from lockdown having held on to its key truisms.
Sport
1 year ago

Rugby's draft system will pick up headwinds in SA

The hype around the draft for next weekend's Springbok Showdown has brought the concept of the system back into focus.
Sport
1 year ago

Despite its protracted hiatus, rugby emerged from lockdown having held on to its key truisms.
Sport
1 year ago