Boks at a disadvantage in Rugby Championship – Vermeulen 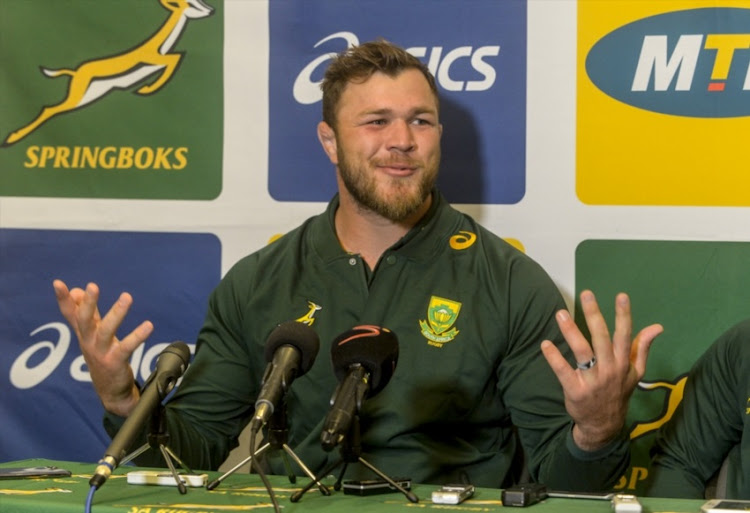 Springbok hardman Duane Vermeulen concedes the Springboks will start the Rugby Championship at a disadvantage should they get the green light from government to travel to Australia for the tournament that kicks off on November 7.

“New Zealand and Australia have been playing for the past 10 or 11 weeks and they already finished their competition‚” said Vermeulen‚ who was part of last weekend’s restart of professional rugby in this country at Loftus.

Vermeulen‚ who has come to define the physicality with which the Springboks go about their business‚ believes full preparedness for the tournament is a moving target.

“From the medical side there was something about you have to play 400-plus minutes before going into an international competition but there are more clever guys behind the scenes that will have to look at that and the way forward.

The Springboks are widely expected to go into the tournament undercooked‚ especially. As Rugby World Cup-holders‚ defending champions and top ranked team in the world they perhaps have more to lose than their major rivals. Vermeulen is necessarily thinking in those terms.

“We don’t even know if the Rugby Championship is confirmed. Yes‚ we won last year and we got the World Cup as well. That does weigh on your shoulders. It’s going to be difficult for us‚” he said.

“Whenever you go into an international competition there are spots up for grabs and you can go up or down in the rankings. It is a difficult thing for us but we are not really focused on being number one.

“For us it is important to start and getting out of Covid. Building continuity and getting guys back up to scratch again and execute the things the coaches want us to do.”

Elton Jantjies neatly sidestepped the question of whether the players are keen to tour.

“That is for the coaches to decide. They are obviously preparing whether we are going or not. This is a big week in terms of the old faces and the new faces getting alignment.

“Understanding what it takes to become a Springbok. Our main focus is the Super Rugby or Currie Cup competitions. Until the Championship is confirmed there is not a lot we can say about that. I’m pretty sure the coaches are prepared for that.”

For Vermeulen‚ given the uncertainty‚ being in the moment is now paramount. “It is difficult circumstances‚ everyone is just getting used to this. We still don’t know what is going to happen. We can only focus on what we can control. We can only control the now.”

Part of the “now” is this weekend’s Springbok Showdown in which both players will run out for the Green Team against the Gold Team at Newlands. It is another opportunity building block in their preparation.

“As players we still need to work out match fitness going into the domestic season. The youngsters get a chance to display their talent on a bigger platform. Maybe get the nod in the future when we get together as a Springbok squad‚” said Vermeulen.

SA Rugby director of rugby Rassie Erasmus may have had cause for concern when Handrè Pollard was claimed by injury‚ but with Elton Jantjies fully fit ...
Sport
1 year ago

Sharks coach Sean Everitt has taken a lot of positives from the 49-28 loss to the Bulls during the Super Fan clash on Saturday at Loftus.
Sport
1 year ago

Australia coach Dave Rennie has expressed some sympathy for the All Blacks over the disputed Rugby Championship schedule and hopes a relaxation of ...
Sport
1 year ago