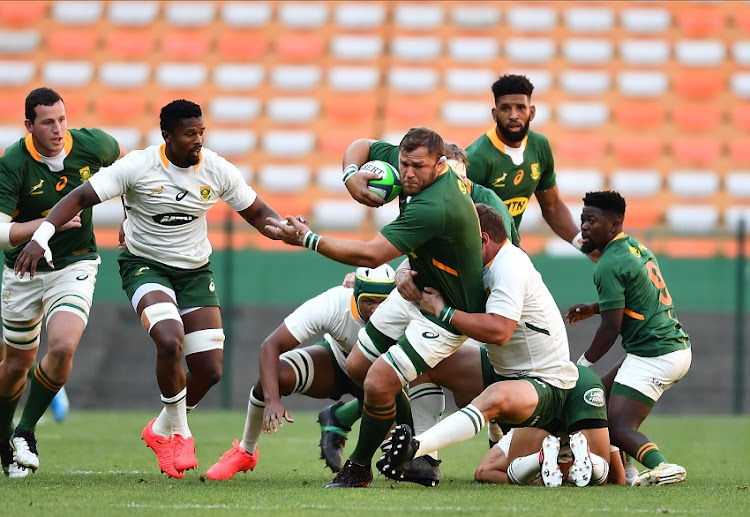 They were in different Springbok jerseys and at times were fraternal, but this was a Springbok trial despite the fancy name.

There wasn’t a lot of fun and precious little flash, but plenty of grunt and substance that showcased but ugly, but necessary physical side of South African rugby.

What this game also showed was Jacques Nienaber’s and Rassie Erasmus’s hands from a tactical perspective.

The coach and director of rugby duo have clear intentions of basing their approach on forward and territorial dominance.

With the kind of forwards at their disposal, they’ve got something to work with. However, that left the backs with very little to work with in terms of lowering their error rate.

The narrow first half margin was indicative of the competitive trial nature of the game. While the game should have moved around and allowed some expression, it felt like there was possession and kick/chase indoctrination that took place during the week that played out through the first 40.

What was expected from this game was the personal coaching hallmarks of Mzwandile Stick (Green) and Deon Davids (Gold).

That unfortunately didn’t materialise. The tense nature of the fixture didn’t allow for that, even though the players looked like they were shedding their cobwebs.

With a number of young players wanting to rubberstamp their presence with unforgettable performances, it wasn’t the case.

Sanele Nohamba though embellished his burgeoning reputation with a classy showing while the scrumming was the highlight of the first half.

Steven Kitshoff in particular was impressive, finding his feet even though Ruan Dreyer was being dealt with by Ox Nche.

By the end of the first half, Kitshoff was a man among scrumming boys, with Luan de Bruin being taken through a scrumming master-class with each set-piece.

Another one who was on the end of a masterclass was the talented, but frazzled Damian Willemse. He’s got all the tricks in the box, but knowing when to use them remains his kryptonite.

His passing was slick, but his goalkicking, the barometer in which most South African flyhalves are judged on regardless of their play-making abilities, let him down.

With better coaching and a clearer mind, Willemse will blossom into the pivot South Africa expects him to be.

Try scoring chances were non-existent and the teams had to settle for penalties being traded by Elton Jantjies and Willemse.

Willemse’s tense evening went from bad to worse when he was yellow-carded in the 45th minute and conceded a penalty try for impending Yaw Penxe from scoring a try.

There was much better structure and intent in the second half, but the mistakes, perfectly understandable as this was the second game from the Covid-19 forced hiatus, hampered the game’s progress.

The green team’s second try, scored by captain Siya Kolisi, was slick. A quick 5m lineout caught the gold team unawares and the speed of the maul led to the try, it was wonderful inventiveness and a move that may need to watched carefully as the season progresses.

As the changes were rung, the structure gradually loosened but what shifted regularly was the scrum dominance. The Gold team held the tabs early in the second half, but the Green unit came back strongly.

Nche, who’s positioning himself as Kitshoff’s replacement, showed he’s no mug with a big scrum that shunted Sadie late in the game.

The game, which was already done as a contest, was sealed by Juarno Augustus’s 71st minute opportunistic try that summed up the expected error-strewn nature of a much-needed and educational hit-out.