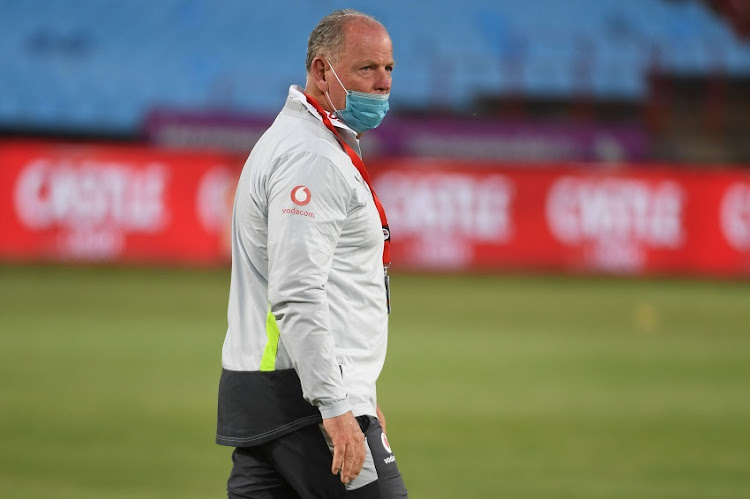 Jake White may be forced to withdraw Springbok stars from his Super Rugby Unlocked team against the Cheetahs on Friday in Bloemfontein if the Springboks get the green light to take part in the Rugby Championship.

On Wednesday White included Duane Vermeulen and Trevor Nyakane‚ who may be in the frame for the hastily arranged Bok camp ahead of the trip to Australia‚ in the starting line-up to face the Cheetahs.

Earlier this week‚ Sanzaar gave SA Rugby until Friday to decide whether they will be sending the Springboks to the Rugby Championship to be hosted by Australia.

“To be fair‚ I don’t know. I don’t know what the rules are there‚” said White about the possibility of losing his Bok stars when he announced his squad for the Cheetahs clash on Wednesday. “Obviously we have prepared our team and I would like to think that the national coach said they need to get some game time under their belts. I would think that even if they are going to the championships‚ all the players playing this weekend will need to get some sort of rugby under their belt.”

Jake White has made five changes to the Bulls’ starting line-up for their round two match of Super Rugby Unlocked against the Cheetahs in ...
Sport
1 year ago

Game time is important for Vermeulen who returns to action after he missed last weekend’s clash against the Griquas as he nursed a knee injury he sustained during the Springboks Showdown against the Stormers.

“I can’t really say that I had a good rest‚ obviously we had to take care of the knee and get the swelling down‚” said Vermeulen‚ adding that he is looking forward to playing the Cheetahs.

“At this very moment we are happy where we are and I can play on Friday. I played two years at the Cheetahs and it was a fantastic time in my career but now they have become opponents and I am used to playing against them in Bloem. I know they will be really pumped up to play against the Bulls on Friday.”

White added that he has inserted highly promising scrumhalf Embrose Papier in the starting line-up to deal with the pace of the Cheetahs.

Embattled Western Province have sought to set the record straight after the departure of two more board members but even that ended in an unexpected‚ ...
Sport
1 year ago

Lions will scrum towards the Stormers’ elephant in the room

If there’s an elephant in the room‚ there’s often no point scrumming away from it. At least that’s the way the Lions say they will approach the ...
Sport
1 year ago

Blommetjies goes into his 100th match bursting with confidence