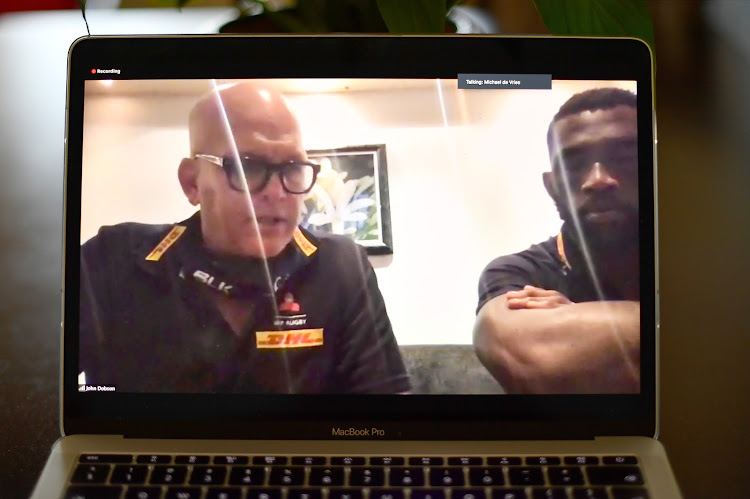 SA Rugby may have some tough decisions to make after it was confirmed on Thursday that the Covid-19 pandemic's tentacles have reached their Super Rugby Unlocked competition.

The mini outbreak is apparently related to the Stormers' round two clash against the Lions at Newlands.

“All our players were tested on Tuesday and for the fifth week in a row‚ everybody was negative‚” said Stormers coach John Dobson in a virtual media briefing.

While none of his squad members tested positive‚ they have to adhere to the protocols around contact tracing.

“The protocols are pretty clear. The two teams involved‚ as well as SA Rugby‚ review that and identify players that were within that contact zone to be excluded.

“Unfortunately Steven and Scarra were. So‚ you can work it out‚ it is probably based on a scrum‚ or something like that.

“They are now excluded for 10 days. Kitsy and Scarra are a bit bewildered‚ as they are negative and were told they can’t play.

“However‚ for the integrity of the tournament and respect for the situation‚ we are very accepting of it‚” said Dobson.

Although the safety first approach is the way to go it is still a bitter pill to swallow for Dobson after his squad tested negative.

“If a player tests positive and he trained‚ the medical team has to review the training footage to see who crossed the contact threshold‚” he explained.

“This was obviously during a match‚ because it was us against the Lions.

“It was somebody who had limited involvement in terms of game time. They reviewed it and our players who were identified were Kitsy and Scarra.”

The developments this week will certainly have a huge impact on the Lions preparations for their match against the table topping Cheetahs' this weekend‚ while the Stormers too will have to rearrange the deck chairs in making their selections.

Whether SA Rugby can further tighten their protocols and avoid suffocating effects of the pandemic as seen in France's Top14 and the English Premiership remains to be seen.

Sharks tighthead prop Thomas du Toit may not get another opportunity to add to his 12 Test caps in the immediate future after the Springboks’ recent ...
Sport
1 year ago

Despite clear improvements in the domestic Super Rugby Unlocked compared to what they served up in the abandoned Super Rugby competition‚ the Lions ...
Sport
1 year ago

Week two of Super Rugby Unlocked has come and gone‚ giving SA a better glimpse of where the domestic game stands at the moment while continuing to ...
Sport
1 year ago

The Lions' Super Rugby Unlocked campaign has suffered another huge setback with four players having to be removed from the squad after returning ...
Sport
1 year ago