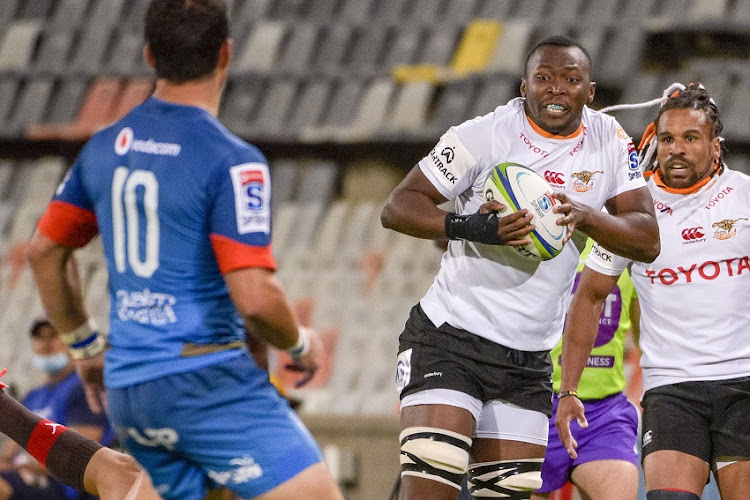 Junior Pokomela of Toyota Cheetahs during the Super Rugby Unlocked match between the Toyota Cheetahs and Vodacom Bulls on October 16 2020 at Toyota Stadium in Bloemfontein.
Image: Frikkie Kapp/Gallo Images

The Cheetahs will also unveil a new captain when they take their Super Rugby Unlocked challenge to Ellis Park to face the Lions on Saturday.

The Lions will be without injured captain Elton Jantjies and the Cheetahs will have to make do without the equally talismanic Ruan Pienaar‚ who may be sidelined for the rest of the year with a medial cruciate ligament injury.

His place in the starting team goes to Tian Meyer‚ while Junior Pokomela will captain the team from the side of the scrum. Pokomela has been one of the standout performers in a Cheetahs team that has advanced to the top of the table in SRU.

Ruben de Haas will be making his debut in the Super Rugby Unlocked competition from the bench. De Haas brings international experience having represented the USA Eagles at the 2019 Rugby World Cup in Japan.

The Cheetahs are flying high in the competition having convincingly beaten the Pumas before subduing the Bulls in consecutive matches. It isn't just the two wins‚ but the way in which they have been achieved that has shot them up in pundits' estimation.

Their forwards have rumbled with intent and their backs have revelled in space.

In Clayton Blommetjies they boast the player with the most carrying metres‚ carries and offloads thus far in the competition‚ while Malcolm Jaer and Rosko Specman are the joint top try-scorers with three each.

The Cheetahs have also scored the most tries after two rounds‚ with the Stormers and the Sharks the only teams to have played one match each.