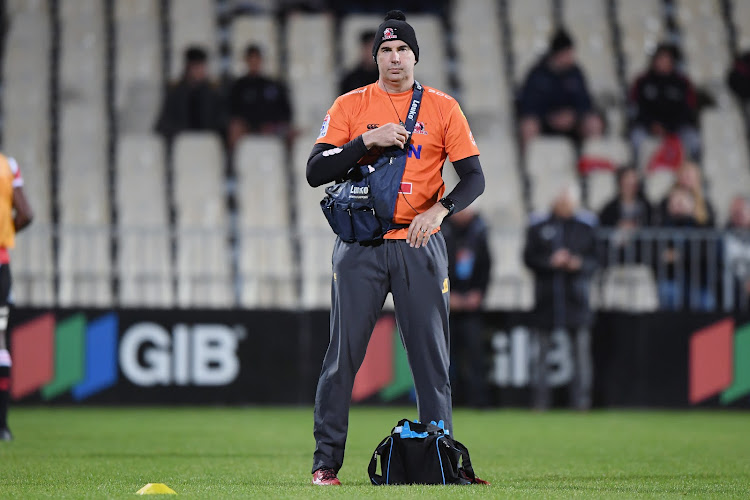 Lions team doctor Rob Collins says the players who've been ruled out are not all positive but came into contact with those who were affected.
Image: Kai Schwoerer/Getty Images

The Lions will have to field a vastly different team for Saturday’s Super Rugby Unlocked catfight against the Cheetahs as nine players are not available due to Covid-19.

This means Lions coach Ivan “Cash” van Rooyen will go into the critical game against the log leaders with a much-changed team.

The Lions lost their two opening games against the Sharks and the Stormers away from home and will be desperate to halt the trend against the Cheetahs under trying circumstances in the first game in their backyard on Saturday.

Lions team doctor Rob Collins said the players who've been ruled out are not all positive but came into contact with those who were affected. They were not named because of doctor/patient confidentiality.

The Lions announced on Wednesday that four players have tested positive with two showing symptoms. Collins said the decision to call off the game did not lie with him.

“It’s a medical choice not to name the players out of the respect for the individuals. I personally wouldn’t care if the world knew if I had Covid-19 or not as I don’t think it should have any stigma attached to it.

"It’s a matter of when I get it and not if‚ but I’m not disclosing other people’s medical information without their consent‚” Collins said.

“We’ve got a 42-man squad and you need 23 on a particular match-day. We can also draw from the juniors if we need to. That’s more of a coaching decision and I stick to the medical side.

"The coaches have to manage from their side and if things were to get to the extent where there are not sufficient players‚ the game being called off would be up to the senior management.”

Collins had a dire warning about the possibility of the second wave and how it could impact rugby.

“With the second wave‚ it’s not like the virus goes away and comes back‚ it’s a case of people stopping what they’re supposed to be doing because they’re getting blasé about it.

"If people keep doing what they’re supposed to be doing‚ it shouldn’t be the case.

"However‚ we’re human beings. As soon as we feel better‚ we don’t do what we have to do and the virus affects more people‚” Collins said.

“If the incidents in the general population go up‚ the same will happen to rugby players because they’re at the union for only a set amount of hours each week.

"The rest of the time‚ they live normal lives like everyone else.”

SA Rugby may have some tough decisions to make after it was confirmed on Thursday that the Covid-19 pandemic's tentacles have reached their Super ...
Sport
7 months ago

Sharks tighthead prop Thomas du Toit may not get another opportunity to add to his 12 Test caps in the immediate future after the Springboks’ recent ...
Sport
7 months ago

School sports are back — kind of, and with 'lots of conditions'

Soccer, rugby and other contact sports may resume at SA's schools with immediate effect - but only for training and with various Covid-19 controls in ...
News
7 months ago

Despite clear improvements in the domestic Super Rugby Unlocked compared to what they served up in the abandoned Super Rugby competition‚ the Lions ...
Sport
7 months ago