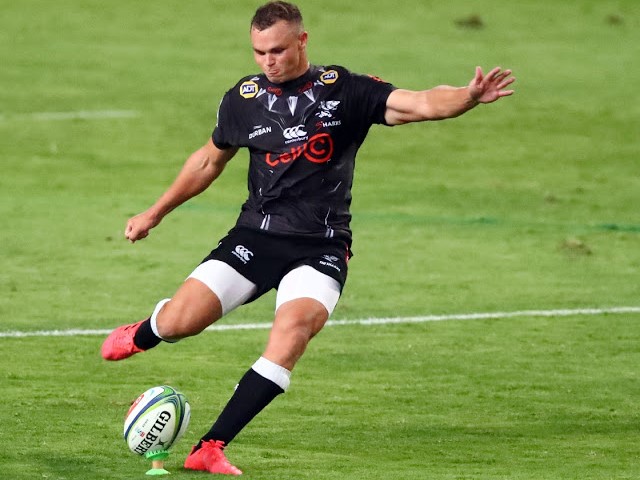 Sharks pivot Curwin Bosch showed his class in what was a terrible advert for rugby when the Sharks just got past the Cheetahs at Kings Park.
Image: Steve Haag/Gallo Images

The Currie Cup looms large on the horizon, and the Sharks are well aware they will have to better their performances in the Super Rugby Unlocked if they are to make an impression in the competition.

The Durban side face the Pumas on Friday, a side that punched well above its weight in the recent event, and asked questions of the Bulls that no other teams managed to do.

Curwin Bosch, the Sharks’ star flyhalf, said they need to start well against the Pumas while also focusing on consistent results.

“We are performance-driven and the reason we do that is because we have something to measure up against. Sometimes we have bad games and get results, but we know that if we perform well, the result will come our way,” Bosch said.

“It’s important that we stick to our structures and stick to our performances. The results will take care of themselves. That said, we need to perform well against the Pumas.”

Bosch, who has been leading the Sharks backs with aplomb, especially in Lukhanyo Am’s absence, said the unit has been happy with its minimal gains.

He has also been impressed by Marius Louw, who has come in for Andre Esterhuizen at inside centre.

“It’s been going well. If you look at a guy like Louw, he’s been in the Sharks system for a while and is a quality rugby player. He had big boots to fill with Esterhuizen leaving, but he’s stepped up and did an excellent job in the number 12 jersey,” Bosch said.

“We’ve had a little bit of disruption in the back three, but the players who are coming in and out are quality rugby players. Our game is simple yet effective and everyone is on the same page. Once we hit our straps, we’ll be good.”

An aspect of Bosch’s game that has been massively impressive has been his goal kicking.

It saved the Sharks on two occasions in Super Rugby Unlocked and remains a key point for the Durban side.

Bosch, who was a proven high school match winner, something he’s carried into the professional ranks, said the eerie stadium silence has far from put him off his kicking routines.

“It’s different without fans, but having gone to a school like Grey PE, the crowd goes quiet, so it’s not new to me, but it’s different. Kings Park has this different thing of clapping, which was something else, but now since it is quiet, it is different. You just have to go through your processes,” Bosch said.

“I’ve also kicked a bit less this year. I have been practicing my kicking, but I’ve focused more on the quality of the kicks.”

Local rugby in a state flux

Super Rugby that was padlocked yesterday and the Currie Cup due to start next week increasingly have the look and feel of a patch job created out of ...
Sport
8 months ago

In what was a Super Rugby Unlocked coronation, albeit a quiet one after a 10-year gap, Jake White's Bulls played the wet conditions perfectly to ...
Sport
8 months ago

Though SA Rugby have indicated that their match against the Pumas has been cancelled‚ the Lions are still holding out hope they can come to grips ...
Sport
8 months ago