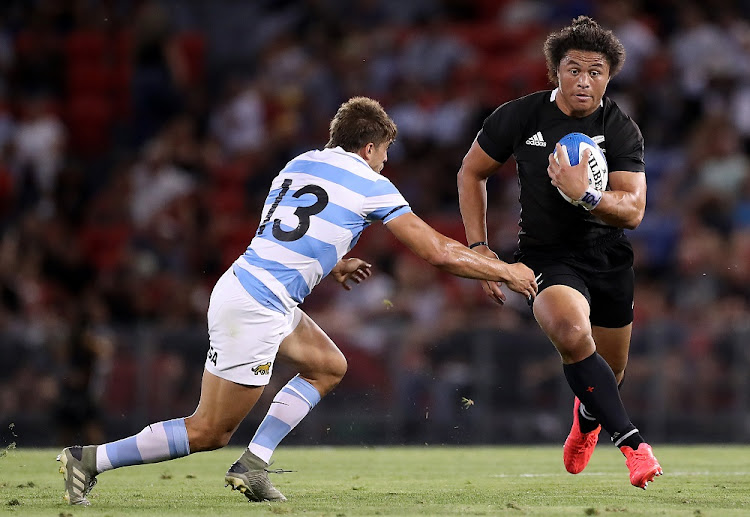 EYES FORWARD Caleb Clarke of the All Blacks in action during the 2020 Tri-Nations match between Argentina and New Zealand on Saturday.
Image: Mark Kolbe/Getty Images

Rugby Championship organisers Sanzaar say they are open to hosting the competition in a centralised location again after this year's edition was reduced to three teams and played entirely in Australia due to the Covid-19 pandemic.

The late withdrawal of world champions the Springboks left hosts Australia, New Zealand and Argentina contesting a Tri-Nations format but the competition normally involves all four sides playing home and away against each other.

New Zealand won this year's title after Australia and Argentina were deadlocked 16-16 in the final game in Sydney on Saturday.

Sanzaar CEO Andy Marinos said the partnership between the four unions recognised the centralised format could work again if needed.

"The concept of a centralised (Rugby Championship) is very possible," Marinos said in a statement.

"The prospect of double-header rounds (is) a huge benefit for the local fans and wider broadcast audience across the four geographies."

With the Springboks pulling out due to concerns about player welfare, the competition lost some of its lustre but still delivered a shock for the ages with Argentina's first ever win over the All Blacks in Newcastle.

The Pumas' 25-15 victory over the three-times world champions came after Mario Ledesma's side had endured a torrid buildup to the competition, with more than a dozen players and support staff testing positive for Covid-19 in Argentina.

They also endured months of isolation and numerous quarantine periods in South America and Sydney.

"The performance of the Argentinean team is quite remarkable if you think about the amount of time they have been away from home and the various quarantine protocols they had to endure," Marinos added.

"It is a testament to their team environment, strong management and a desire to want to play in a very difficult year for the sport."

Apart from that massive upset in Newcastle, however, few of the games delivered great performances or provided a spectacle for the fans.

Defence dominated, with the Pumas in particular content to live off penalties.

Despite being regarded as one of the more enterprising international sides in recent years, they scored just two tries in their four games.

The All Blacks and coach Ian Foster came under intense scrutiny after losing successive games, 24-22 to the Wallabies in Brisbane and then to the Pumas.

They won the title on the back of a 43-5 win over the Wallabies in their first game and a 38-0 thrashing of the Pumas in their last match to alleviate some of the pressure from fans and media back in rugby-mad New Zealand.

Wallabies coach Dave Rennie faces the toughest off-season of all three coaches, still unsure if his players have the instinct or rugby intelligence to win close matches.

While he has unearthed some promising young players, depth of talent will test his planning for the foreseeable future.

Argentina's squad left Australia on Sunday full of pride in their remarkable Tri-Nations campaign and with their reputation as an international rugby ...
Sport
1 year ago

Bulls cement their position at top of Currie Cup

The Bulls cemented their position at the top of the Currie Cup log with an uninspiring, but workmanlike 40-13 bonus-point win against the Cheetahs at ...
Sport
1 year ago

Bulls put Cheetahs in their place

The Bulls cemented their position at the top of the Currie Cup log with an uninspiring but workmanlike 40-13 bonus-point win over the Cheetahs at ...
Sport
1 year ago

For the second consecutive week Western Province relinquished their position of power and surrendered tamely in the Currie Cup.
Sport
1 year ago

Siya Kolisi heartbroken after WP suffer another defeat: 'That‚ honestly‚ breaks you'