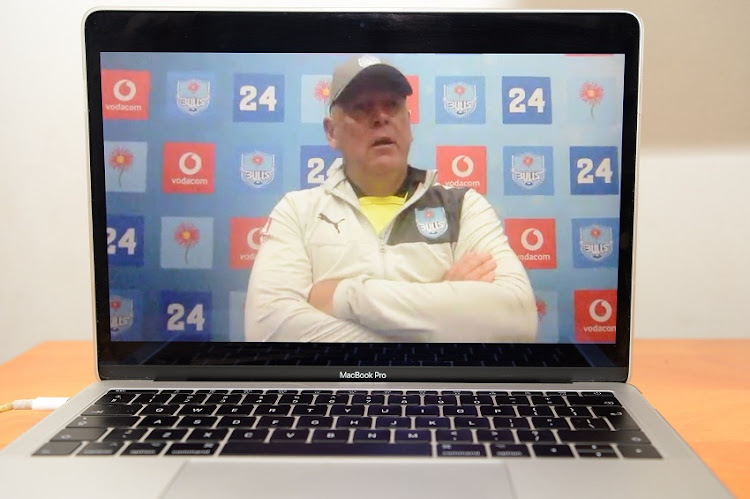 Jake White is keen to see how his younger players cope when playing with a stronger team around them.
Image: Lefty Shivambu/Gallo Images

Bulls coach Jake White has picked a strong team for the Preparation Series match against the Stormers at Loftus on Friday with one eye on the imminent Rainbow Cup next month.

The Pro14 campaign ends in the coming weeks with competition renamed the Rainbow Cup and including the Bulls‚ Lions‚ Sharks and Stormers, and the 12 teams from Wales‚ Ireland‚ Scotland and Italy.

“To be fair‚ the Stormers are always a tough side to play against. But bringing some of the senior players is based on the fact that a month from now it will probably be the start of the Rainbow Cup‚” said White when he announced the squad for the Stormers match that included seasoned campaigners like Trevor Nyakane‚ Marco van Staden‚ Cornal Hendriks‚ Johan Grobbelaar‚ Jacques van Rooyen‚ Tim Agaba and Morné Steyn.

“So‚ if we are going to play in a month’s time‚ we must have some sort of rugby for those players. I think again‚ without giving too much away‚ the reality is that I want to see how some of the younger boys are like when playing with a stronger team around them.

“It’s easy to just to pick the youngsters‚ I have seen what they are like as a group and winning junior competitions. But I want to see a player like Werner Gouws playing with two Springboks in the back row. Among the front row‚ I thought Gerhard Steenekamp and Joe van Zyl have played really well.”

White hopes his players will be fully fit and he would have nailed down his combinations by the time the Rainbow Cup starts.

“There is a lot of thought that’s gone into those combinations‚ of course it is the Stormers but when the Rainbow Cup comes we are going to make sure that we have strongest combinations. We also have to know that if we lose Springbok players like Lizo Gqoboka and Trevor Nyakane how is our front row going to look like and have they been able to play together? The Rainbow Cup is imminent and we have to have some sort of rugby and, hopefully, the players will be ready.”

In his team to face the Stormers‚ Nyakane comes in at prop‚ Ruan Nortje and Marco van Staden return at lock and open side flank respectively, while recently recruited scrumhalf Zak Burger will make his debut. Hendriks and Stedman Gans resume their midfield partnership with Marco Jansen van Vuren shifting to left-wing and Marnus Potgieter being named on the extended bench.

Richard Kriel replaces his brother David at fullback with the latter being rested and the bench also boasts experience with Johan Grobbelaar‚ Jacques van Rooyen‚ Tim Agaba and Morné Steyn all set to add fresh legs later in the match.

Affectionately known as 'Thor'‚ Bulls No 8 Duane Vermeulen hammered his way to the title of South African Player of the Year for a second time.
Sport
1 year ago

“The north-south derby is always a ferocious affair and this match will be no different. The fact that it is a warm-up does not make it easier. We've named a little more experience for this meeting which was always in the plan as we gather momentum towards the upcoming season‚” added White.