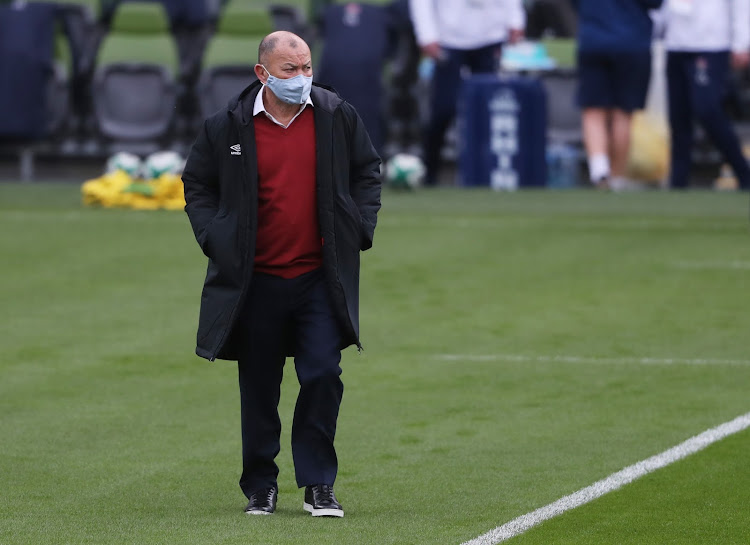 England head coach Eddie Jones before the match against Ireland at the Aviva Stadium in Dublin, Ireland, on March 20 2021.
Image: REUTERS/Niall Carson

England head coach Eddie Jones must be held accountable for their disastrous Six Nations campaign, but the priority should now be to address pressing issues within the team, former coach Clive Woodward said.

Saturday's 32-18 defeat by Ireland was defending champions England's third in the tournament and they are set to finish fifth, their joint-worst position since Italy joined the Six Nations in 2000.

It is the first time since 1976 that they have achieved a reverse triple crown of losing to Ireland, Scotland and Wales.

"It's time for Eddie Jones to look in the mirror, not the window," Woodward, who guided England to victory in the 2003 Rugby World Cup, wrote in his column for the Daily Mail.

"Somebody at the Rugby Football Union needs to ask some sharp questions of him. There is no respected rugby 'brain' asking the difficult questions.

"What's going on? Why have England produced only one decent performance? Why is the England team not reflective of the fantastic talent we see in the Premiership?"

"There is so much England need to address and they need to start right now."

England were poised to kick on after reaching the 2019 World Cup final, which they lost to South Africa, but now find themselves back to square one.

Woodward said England had paid the price for complacency.

"Somebody at the RFU needed to badly investigate what went wrong in the World Cup final instead of automatically handing Jones another contract," he wrote.

"An inquest was needed. It was all too congratulatory when England returned from Japan and English rugby has paid a heavy price."

Bulls narrowly defeated the Stormers 34-29 during their exciting Preparation Series clash at Loftus on Friday evening to register their third ...
Sport
3 weeks ago

Swanepoel kick after the hooter settles try fest for the Lions

The Lions did enough to squeeze out a good outcome from a 43-40 seesaw Preparation Series win against the Sharks at Ellis Park on Saturday that was ...
Sport
3 weeks ago

Bulls coach Jake White has picked a strong team for the Preparation Series match against the Stormers at Loftus on Friday with one eye on the ...
Sport
3 weeks ago

The Lions did enough to squeeze a good outcome from this see-saw match against the Sharks that was decided only after the hooter.
Sport
3 weeks ago

Otere Black claimed 19 points as the Blues cruised to a 39-17 win over the Highlanders at Eden Park on Sunday to pick up a second straight win at the ...
Sport
4 weeks ago
Next Article