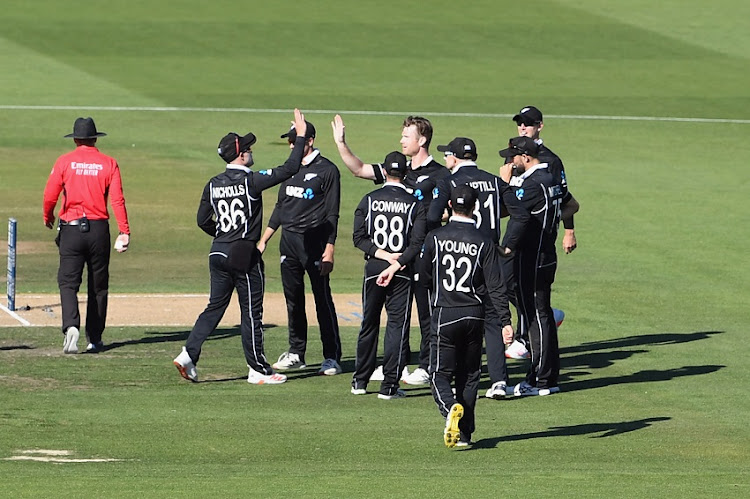 James Neesham of New Zealand (C) is congratulated by team mates after dismissing Tamim Iqbal Khan of Bangladesh during game two of the One Day International series between New Zealand and Bangladesh at Hagley Oval on March 23, 2021 in Christchurch, New Zealand.
Image: Kai Schwoerer/Getty Images

New Zealand called up an uncapped Finn Allen and picked Will Young for the three-match Twenty20 series against Bangladesh on Tuesday in their bid to compensate for the absence of six players bound for next month's Indian Premier League (IPL).

Regular captain Kane Williamson, who missed the ongoing ODI series against Bangladesh with a wrist injury, and five other players have been allowed to skip the Twenty20 series and rest at home before they leave for India.

Young, who made his test and ODI debut this season, got his maiden Twenty20 call-up to join the 13-member squad which includes returning speedsters Lockie Ferguson and Adam Milne.

"It's certainly been a season like no other and once again we've had to be pragmatic in our approach," selector Gavin Larsen said in a statement, explaining how complex it was to compile the squad for the series beginning on Sunday.

"The six guys who will miss this series are incumbents in our T20 side and the decision to give them some time at home with family before they embark on a long stint in India, was principally made with their welfare in mind."

Larsen conceded it allowed New Zealand to test their bench strength ahead of their Twenty20 World Cup campaign in India later this year.

"We're also very aware of the need to give others opportunities in a World Cup year and it’s great to be able to introduce Finn and Will to the set-up, as well as welcome back Lockie and Adam."