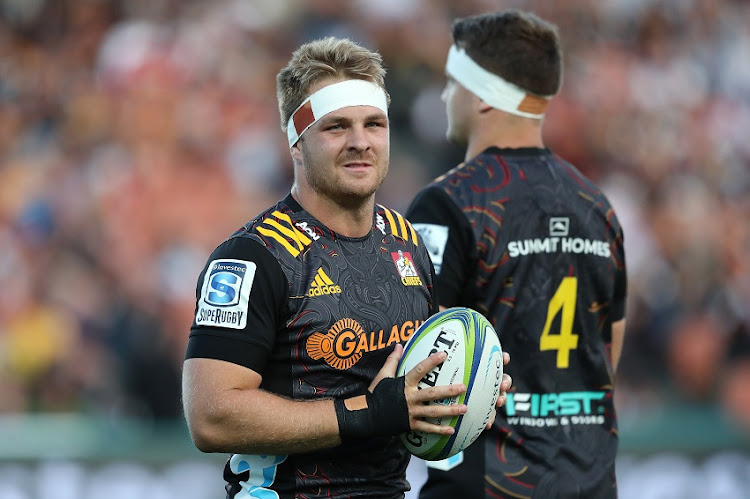 All Blacks and Chiefs captain Sam Cane says he hopes to come back from the injury before the end of the rugby season.
Image: Michael Bradley/Getty Images

All Blacks captain Sam Cane will be sidelined for up to six months after suffering a pectoral injury, his Super Rugby team the Chiefs said on Thursday.

Cane would miss the remainder of New Zealand's Super Rugby Aotearoa season and undergo surgery next week after suffering the injury in the win over the Blues on Saturday, they said in a statement.

"I’m looking forward to getting into some rehab post-surgery and doing that really well, so I am coming back in good shape for the end of the rugby season, whatever rugby that maybe."

Scans and specialist examination revealed a tear in Cane’s right pectoral tendon, with a recovery time of four-to-six months post-surgery, the Chiefs said.

That will rule Cane out of the All Blacks' tests against Italy and Fiji slated for July, pending World Rugby sign-off.

A full six-month recovery would also mean Cane missing out on at least part of the four-nation Rugby Championship, which is expected to be held in a September-October window.

All Blacks lock Sam Whitelock, who has led the side on several occasions, will be among the top candidates to replace Cane as skipper, while loose forward Ardie Savea could take the number seven shirt in his absence.

"We are all disappointed for Sam, but we have full faith in the medical team around him and we wish him well for his surgery and rehabilitation," said All Blacks coach Ian Foster.

"As All Blacks captain, he will still play a key role in our planning for the 2021 season, and we look forward to him returning to the footy field once his rehab is complete."

South Africa are unlikely to co-host the Rugby Championship but the Springboks may yet get to play on home soil in that tournament this year.
Sport
1 year ago

The redoubtable tighthead prop's decision to remain in the Cape will come as a major boost for the team after utility back Damian Willemse also opted ...
Sport
1 year ago

New Zealand Rugby (NZR) will continue to have dialogue with players opposed to private equity investment in the All Blacks to build support for the ...
Sport
1 year ago

Stedman Gans has revealed he inadvertently blurted out something in frustration during his debut match at the Bulls as the Pretoria side continued to ...
Sport
1 year ago

If people are allowed at malls in their droves, surely a compromise can be made to have some fans back in stadiums
Sport
1 year ago

Siya Kolisi said a lot of the decisions made by men do not involve women.
Sport
1 year ago