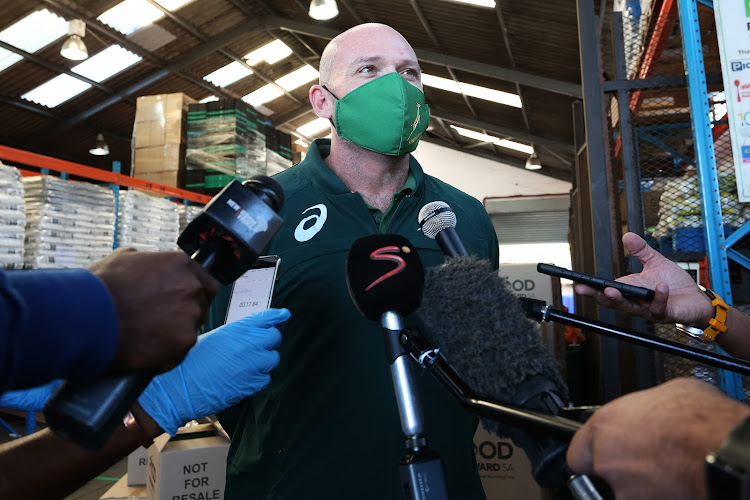 Jacques Nienaber will make his debut as Springbok head coach on the weekend July 2 and 3.
Image: Shaun Roy/Backpagepix

In-form Georgia will be the opposition when the Springboks come out of Covid-19 enforced hibernation ahead of the series against the British & Irish Lions in July.

The Springboks‚ who have not played a Test since winning the Rugby World Cup (RWC) in November 2019‚ will use the opportunity to get much needed game time ahead of their one-in-a-dozen years series with the Lions.

They will face opposition who have put their best foot forward in qualification for the 2023 RWC in France with Georgia unbeaten in their four matches and already on the cusp of qualification.

The short tour will be Georgia’s first to SA‚ but the teams squared off once at the then Aussie Stadium in Sydney during the 2003 World Cup.

Jacques Nienaber will make his debut as Springbok head coach on the weekend of July 2 and 3‚ with the second clash scheduled a week later. SA Rugby will confirm the exact dates‚ venues and kick-off times in due course.

“Nothing beats a full-blooded international to test your skill set‚ readiness and ability under pressure‚ and we are delighted to have this opportunity before the Lions series‚” he said.

“Jacques (Nienaber)‚ his coaching staff and management have been working around the clock to get the team as well prepared as possible. The Georgia series is a much-needed opportunity after such a long and unforeseen interruption due to the Covid-19 pandemic.”

Last year‚ Nienaber was named as Springbok head coach‚ but the worldwide pandemic has prevented the RWC champions from playing any Tests since they beat England in the final in Japan.

“The confirmation of the Georgian Tests‚ and the announcement of the British & Irish Lions squad last week, have caused a lot of excitement and I am sure it will lift the spirit of the players. We can now accelerate our preparations for our return to Test rugby‚” said Nienaber.

Lasha Khurtsidze‚ Georgian vice-president for high performance and development‚ described the forthcoming series as a result of the growing friendship and cooperation between rugby authorities in Georgia and SA.

“Playing against them is a great honour for us‚” said Khurtsidze.

Bulls director of rugby Jake White owed much of his team's success over the Stormers in their Rainbow Cup SA clash in Cape Town to fastidious ...
Sport
1 year ago

“We have only played the Springboks once before‚ in our first RWC appearance in 2003‚ when we scored the first try. A lot of time has passed since then. They are the current world champions and we have developed as well.”

According to Khurtsidze‚ SA Rugby has over a number of years made an active contribution to the development of Georgian rugby.

“We appreciate the fact that we have friendly and close relations with SA Rugby. Our under-20s have been invited to SA on numerous occasions to play in very high-level tournaments. As a leading tier one rugby nation‚ this makes SA an important contributor to the development of Georgian rugby.”

The Springboks kick off their series against the Lions on July 24.

A critic claimed the Springboks' World Cup victory was "well-deserved, albeit aided by fortune", but the team had "ducked" and "hidden" from ...
Sport
1 year ago

Even if his relationship with the Green and Gold has by and large been unrequited‚ Scarra Ntubeni is still driven by the ambition of playing for the ...
Sport
1 year ago

Pivotal Springboks lock RG Snyman is a major doubt for the anticipated British and Irish Lions tour after he suffered a ‘minor knee’ injury setback ...
Sport
1 year ago