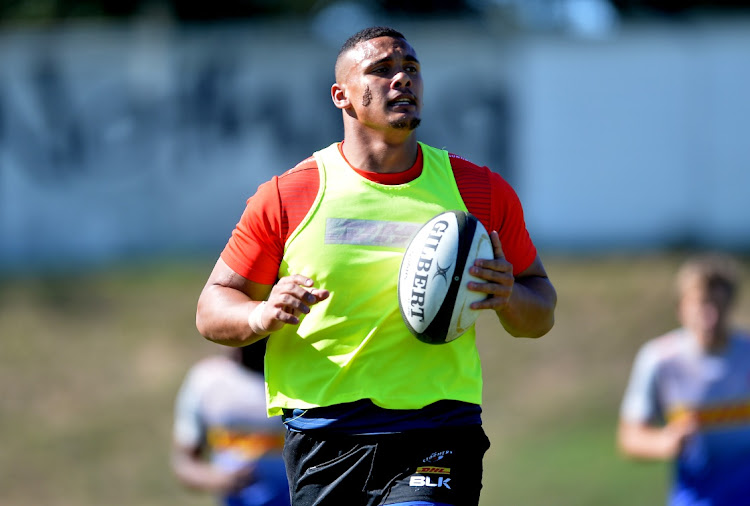 Juarno Augustus has been granted an early release from his contract with Western Province Professional Rugby.
Image: Ashley Vlotman

The Stormers backrow stock will take a temporary hit with the news that No 8 Juarno Augustus is set to join Northampton Saints for the next two seasons.

Augustus is off in July.

The 23-year-old has been granted an early release from his contract with Western Province Professional Rugby (WPPR) and intends to return to his home union in 2023.

Having impressed for WP U19‚ Augustus was selected for the Junior Springboks in 2016 and went on to be named World Rugby U20 Championship player of the tournament that year‚ scoring seven tries in Georgia.

He made his senior WP debut in 2017 and played his first game for the Stormers later that year.

He has played 19 times for the Stormers and represented WP on 15 occasions.

Injuries have, however, hampered the barrel-chested loose forward's progress and he missed the start of Rainbow Cup SA as a result of another niggle.

“This is a great opportunity for me to experience a new environment and grow on and off the field so that I can add more value in the blue and white jersey in the future‚” said Augustus.

He may be a little reluctant to see his backrow battleship go but head coach John Dobson believes Augustus will benefit from his time in England.

“We were not going to stand in Juarno's way and wish him all the best. He is still very young and will add to his game in the next two years before returning to us.

“He is a proud product of this region and we look forward to seeing him develop his game and return a better player one day.

“We have seen the benefit in the past of such a move with our current captain Steven Kitshoff and we are hopeful that Juarno's career will follow the same path‚” he said.

SA Rugby on Tuesday reported their Covid-19 inspired austerity measures have paid off but that they are by no means out of the woods.
Sport
1 year ago

In-form Georgia will be the opposition when the Springboks come out of Covid -19 enforced hibernation ahead of the series against the British & Irish ...
Sport
1 year ago

A critic claimed the Springboks' World Cup victory was "well-deserved, albeit aided by fortune", but the team had "ducked" and "hidden" from ...
Sport
1 year ago