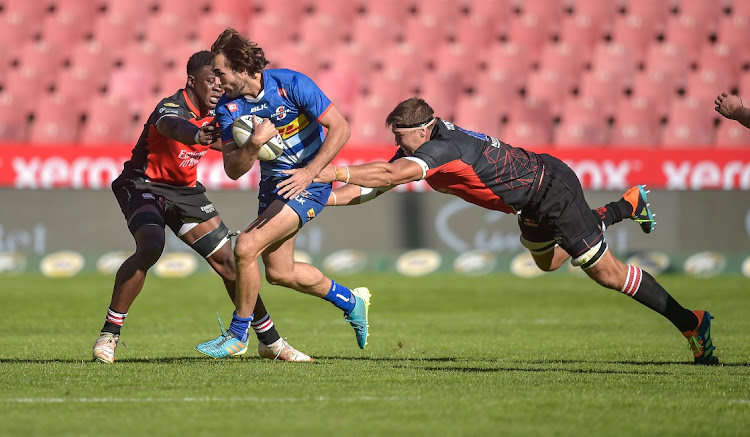 Dan du Plessis of the Stormers attempts two break two challenges in the Rainbow Cup SA match against the Lions at Ellis Park in Johannesburg on May 15, 2021.
Image: Christiaan Kotze/Gallo Images

The Lions again committed hara-kiri just when they looked to be breathing life into an ailing campaign.

Last year Ruhan Nel broke the Lions’ hearts at with a stoppage time try for the Stormers and this time it was Tim Swiel who laid the boot in to deny the hosts their first win of the Rainbow Cup SA campaign.

The 39-37 win at Ellis Park on Saturday of course also gets the Stormers off the mark and they will be mightily relieved after slugging it out without reward in the first two rounds of the competition.

They deserve kudos for the resolve they showed in this contest that got more ragged as the shadows got long.

If there is any consolation for the Lions it is the confirmation of a potential successor to long-time flyhalf Elton Jantjies. In Jaden Hendrikse the Lions have a strapping flyhalf who walks tall, kicks long and is vast in potential.

The 19-year-old belied his age with a composed and assured performance but it wasn't enough to deny the Stormers who just would not give up.

They were 37-29 down with four minutes to go before Dan du Plessis finished off a long range try, and Swiel banged over a penalty to complete the comeback.

The Stormers went into the clash without the considerable presence of Pieter-Steph du Toit who had to be rested. Injuries too stripped much of the gloss from this Stormers side but those who deputised did so with distinction.

The more celebrated Bongi Mbonambi and Steven Kitshoff were colossal in the tight loose, Damian Willemse is starting to play with raging authority, while Edwil van der Merwe, strictly speaking, has all the moves.

The Stormers initially were the more assertive on the deck as they frustrated the Lions at the breakdown but it was the hosts who made the more telling incursions in the opening half.

Burger Odendaal and Wandisile Simelane engaged the defence in different ways, while there was nothing indecisive about fullback EW Viljoen. That full throttle approach also helped yield the fullback a try after some slick handling from the Lions’ backs a minute or so from the break.

The Lions will push 19-year-old Jordan Hendrikse into battle against the Stormers at Ellis Park on Saturday.
Sport
8 months ago

Though the Stormers grabbed the early lead it was Simelane who punished the visitors when they failed to clear their lines.

If that try had a hint off good fortune about it, then the opposite was true of MJ Pelser’s effort. Hendrikse showed that the chicken wing pass is not out of place in the Rainbow Cup and found Pelser who ran a wonderful support line in the 23rd minute.

It was the kind of try that would have enthralled the Ellis Park faithful, but the cries of delight were reserved for members of the substitutes’ bench.

But as much as the Lions looked the more potent on attack, their lack of composure at times invited pressure. In one rapid turnaround, Herschel Jantjies intercepted with the Lions on the attack and though he was reeled in by Simelane, the Stormers ultimately profited from the favourable field position.

It helped keep them in the game and they would have drawn much confidence from their recent skirmishes against the Lions, which ran to a similar script.

As the match wore on they grew in confidence with Rikus Pretorius and Du Plessis tellingly imposing themselves.

Why the Lions still appear more prey than hunter

They are not quite in the realm of easy-beats‚ but the dearth of international class in their ranks made the Lions a targeted team even before the ...
Sport
8 months ago

Bulls coach Jake White has drafted the Springbok duo of Arno Botha and Trevor Nyakane into his match-day team to face the Sharks in their Rainbow Cup ...
Sport
8 months ago

The Stormers backrow stock will take a temporary hit with the news that No 8 Juarno Augustus is set to join Northampton Saints for the next two ...
Sport
8 months ago