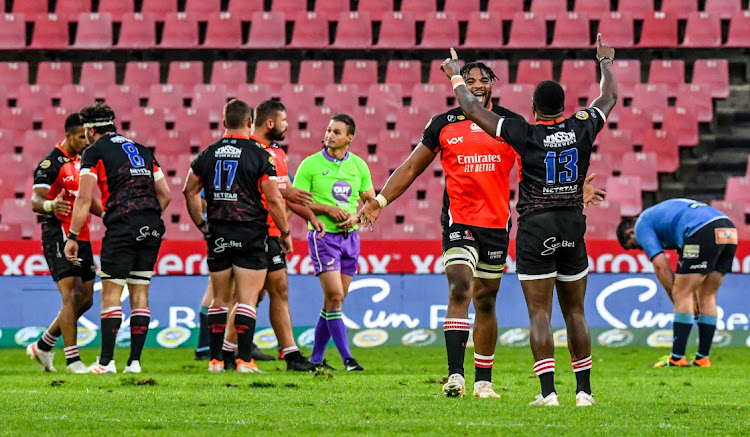 Vincent Tshituka and Wandisile Simelane of the Lions celebrate after the match.
Image: Sydney Seshibedi

Rainbow Cup SA was in danger of becoming a procession for the Bulls before the Lions picked themselves off the canvass and delivered a blow that would have reverberated around the competition.

The Lions' 34-33 win at Ellis Park means the Bulls will now very much be in the crosshairs of the Stormers and the Sharks‚ who are four log points adrift with two rounds remaining.

They have the Lions to thank after the Johannesburg team sparked to life just when they looked dead and buried.

Down 33-20 after 55 minutes following post-break tries for the Bulls by David Kriel and Chris Smith‚ the Lions bounced back with renewed resolve‚ scoring converted tries through MJ Pelser and Fred Zeilinga to snatch a dramatic win.

Their cause was perhaps aided by Duane Vermeulen's departure with a twisted ankle in the last quarter but the Lions‚ despite the odds‚ remained undaunted and finished the game as they started – with a spring in their step.

Coach Ivan van Rooyen nodded in the affirmative when asked about flyhalf Hendrikse and inside centre Odendaal's impact.

“In the last few weeks everyone has seen Jordan has huge potential. His challenge will be consistency as teams start making plans to counter him. He gives confidence to the players around him and his decision making is good. His career ahead is really exciting.

“I thought Burger was exceptional. He leads through action and not saying too much. It's good for the team to have a guy who takes the ball and leads the charge and to have someone who puts his body on the line in defence‚” said Van Rooyen.

The coach also had bouquets for his colleagues in the coaches' box after their plan came together. “We went in with a good plan. The players kept to it. If you can stop the Bulls' momentum and get parity in the set pieces then you have a chance. I'm proud about them sticking to the plan.”

Apart from getting one over the Bulls' scrum‚ the Lions also stunted their momentum in the maul.

If there, however, is an area that will invite close scrutiny before their next engagement, it will be the Lions' efficiency in the rucks.

“Our reaction to the ball was a bit slow‚ especially in the first 40‚ 45 minutes. They counter-rucked well‚” said Van Rooyen of the Bulls.

After close defeats in recent weeks the win will do wonders for the belief in the Lions' camp.

Overall though, the win would have come as a huge release of pressure for Van Rooyen and the Lions who had been winless in the competition and had gone down six times in a row to the Bulls before Saturday.

“It is big to win at home and big to beat the Bulls. I'm sure the guys can take this forward.”

Geographically not much separates these teams but there of late has been a gulf in performance and results and, as a consequence, where the Lions and ...
Sport
1 year ago

Tim Swiel put away a late penalty to earn the Stormers the much needed 25-22 Rainbow Cup SA win over the Sharks under the light rain at Kings Park ...
Sport
1 year ago