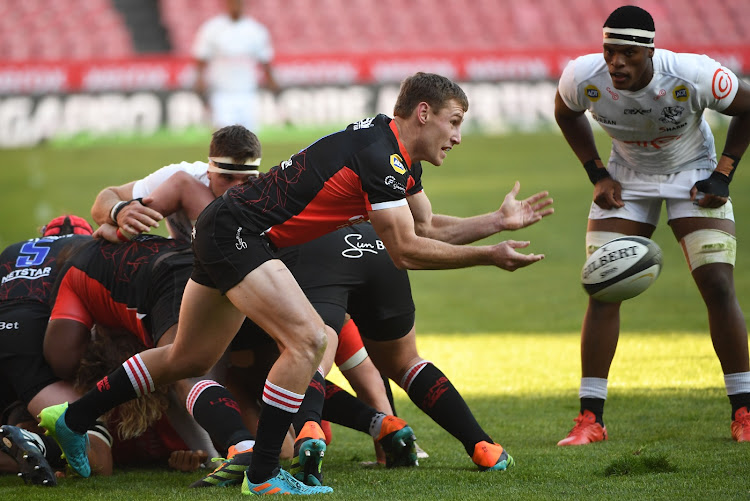 Jaden Hendrikse of the Sharks during the PRO14 Rainbow Cup SA match against the Lions at Ellis Park on June 5, 2021.
Image: Lee Warren/Gallo Images

The Sharks remained in the hunt for a place in the PRO14 Rainbow Cup final with a concerted and determined performance beating the Lions 33-21 at Ellis Park on Saturday.

The equation was simple for the visitors. They needed to not just win but do so with a bonus point to keep alive their prospects of chasing down the Bulls for a chance to play in the PRO14 Rainbow Cup final.

They will have the opportunity to do just that when they play the Bulls in Durban next week but they will have to play out of their socks to deny the hitherto pacesetters in the competition a bonus point.

It took them a while to get going against the Lions but they were single-minded in the pursuit of a bonus point once they got warmed up. Sure, it produced errors but their common purpose saw them dominate much of the first half.

What makes their win even more creditable was the disruptions they suffered in selection. They had to rest players for the national cause while three others picked up niggles while on duty for an invitational team against the Cheetahs in Bloemfontein last weekend.

It were they, however, who played with greater purpose and resolve after largely repelling early Lions pressure.

Their forwards, although missing some regular starters, fronted up as the Lions failed to get the traction in the scrum or buoyancy in the line-out they had hoped for.

The Sharks stood their ground in the scrum but were forced into a change before the half hour mark with loose head prop Ntuthuko Mchunu having to make way Ox Nche.

The Lions too had to rearrange the deckchairs when the highly industrious Vincent Tshituka took a considerable blow to the head while trying to make a tackle.

His departure was a huge blow to the Lions but the Sharks by then were already in the ascendancy. Phepsi Buthelezi peeled off the back of the scrum with gusto, with captain Henco Venter often in close support.

The Sharks locks Hyron Andrews and Ruben van Heerden applied a spoiling hand in the line-out but in mitigation the Lions were forced into an 11th hour change at hooker.

At the back Makazole Mapimpi provided familiar thrust on his return from commitments in Japan, while Jaden Hendrikse proved a constant thorn in Lions’ flesh.

Bulls captain and talismanic Springbok No.8 Duane Vermeulen is a serious injury concern for national coach Jacques Nienaber ahead of the ...
Sport
2 weeks ago

Werner Kok, this time operating at outside centre, as you’d expect, popped up in places not even his locks could reach.

Lions fullback EW Viljoen made a roaring start to the clash by making some telling incursions that had the Sharks’ defence scrambling. But like his teammates, Viljoen’s star faded as the first half wore on.

The Sharks continued to play with more freedom and predictably eschewed penalty opportunities at goal. It meant they attempted everything at breakneck speed.

Sure, they made errors but there were times the passes stuck, no more impressively than when Hendrikse popped the ball to an unmarked Buthelezi.

LIAM DEL CARME | Alive and kicking: Currie Cup is still in the game

Super Rugby has overshadowed the competition over the past few decades, but things have improved
Sport
2 weeks ago

MTN renews its headline sponsorship of the Springboks

Telecommunications company MTN has renewed its sponsorship of the Springboks for a further five years to 2025.
Sport
3 weeks ago