Rachel Kolisi on long-distance relationship with Siya: 'We have a hectic six months ahead' 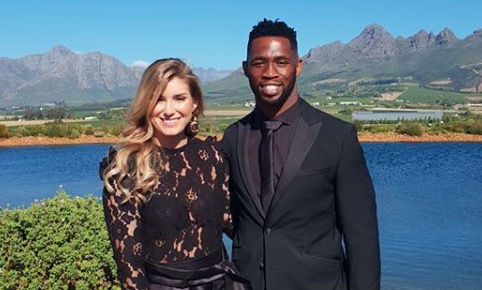 Businesswoman and wife of Springbok captain Siya Kolisi, Rachel Kolisi, has opened up about adjusting to life after Kolisi's move to KZN to join the Sharks rugby team.

Rachel, who is based in Cape Town, confirmed in February that she and their children had not yet relocated to Durban with Siya and would remain his “No 1 supporters from Cape Town” until making the move at the end of the year.

Last week, the pair spent time together with their family and friends, including TV personality Minnie Dlamini-Jones and husband Quinton, at the luxurious Perivoli Lagoon House in the Western Cape.

Taking to Instagram after the trip, Rachel opened up about tbeing away from her husband, and predicted the next six months were going to be "hectic".

“Had the best nine days with a Cape Town visit from Siyamthanda,” said Rachel.

“I think if there's one thing I’ve really taken from the past year-and-a-half it’s to be intentional about being fully present in moments with loved ones. We have a pretty hectic six months ahead but a lot of good days to look forward to.”

Siya will lead the Springbok in next month's much-awaited series against the British & Irish Lions.

The series is set to take place from July 3 until August 7.

Reacting to Siya leaving the Stormers earlier this year, Rachel reminisced about her husband’s time with the team and said she would always cherish the beautiful memories and friends they made during Siya’s 11 years with the franchise.

“Every injury, every loss, every victory, every sacrifice, every memory, the many tears, I will cherish them all. Because we learnt from the bad and hold close the good. It has been a tough season for us personally, having to make really big and hard decisions, but change is inevitable,” she said.

'We’ll be his No 1 supporters from Cape Town': Rachel on Siya Kolisi's Sharks move

Rachel Kolisi and the rest of the family will remain in Cape Town for a bit while Siya heads to Durban to join the Sharks.
Sport
1 year ago

‘It’s been a tough season for us personally, but change is inevitable’: Rachel on Siya Kolisi’s Stormers exit

“Every injury, every loss, every victory, every sacrifice, every memory, the many tears, I will cherish them all."
Sport
1 year ago

The couple have struggles, just like you and I.
TshisaLIVE
1 year ago